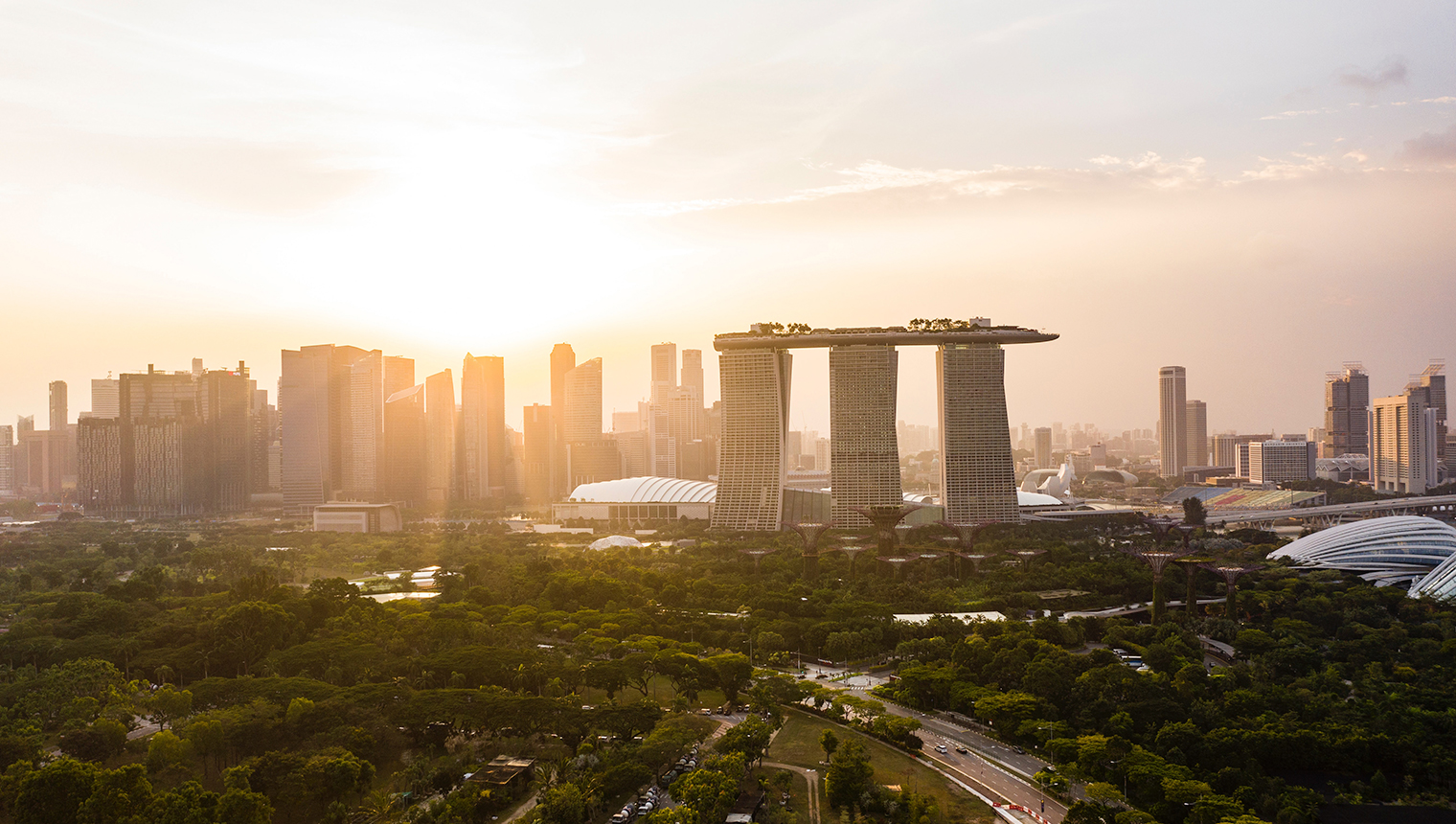 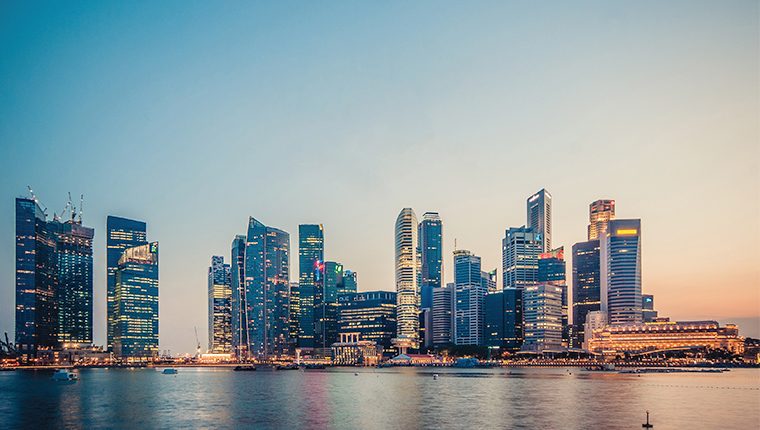 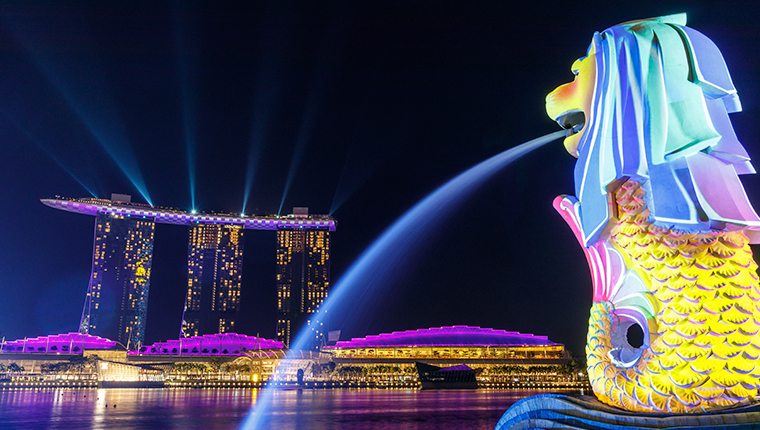 listen)), officially the Republic of Singapore, is a sovereign city-state and island country located in maritime Southeast Asia. Singapore lies about one degree of latitude (137 kilometres or 85 miles) north of the equator, and is situated off the southern tip of the Malay peninsula, and, by extension, the southernmost extremity of continental Eurasia. The island country is wedged between western Indonesia and peninsular Malaysia, sharing its southern maritime border with the Batam, Bintan, and Karimun archipelago of the former’s Riau Islands province, and its northern, western, and eastern maritime borders with the latter’s Johor state; it is additionally in the vicinity of Sumatra to its west and Borneo to its east. The island country is enveloped by the littoral waters of the Johore Strait to its north and the Singapore Strait to its south, and is geographically positioned within the confluence of the Indian and Pacific Oceans, being bounded by the Malacca Strait to its west and the South China Sea to its east. The country’s territory, which is archipelagic, is composed of one main island, 63 satellite islands and islets, and one outlying islet, the combined area of which has increased by 25% since the country’s independence as a result of extensive land reclamation projects.

Throughout its millennia-long history, Singapore was a maritime emporium that fell under the suzerainty of several successive Malay polities: initially a series of ancient to medieval Hindu-Buddhist thalassocratic empires, subsequently a medieval localised Hindu-Buddhist kingdom, and ultimately two early modern Islamic sultanates.[14][Note 8] The 1819 arrival of Stamford Raffles, a British colonial officer, and the subsequent establishment of a British East India Company trading post on the island—then part of the Johor Sultanate—marked the genesis of modern Singapore. Five years later, the British and Dutch East India companies partitioned the Sultanate, with the British coercively wresting Singapore from the Sultan in the process, marking the cessation of indigenous rule over the island for the first time in its history. In 1826, Singapore was incorporated into the Straits Settlements, a pan-Malayan presidency of the Company with Penang as capital,[15][Note 9] and in 1830, the Settlements were annexed to British India as a residency, where they would be governed from the capital of Calcutta under two administrations—until 1858 under Company rule, and—following the Company’s collapse in the wake of the 1857 Indian Rebellion—until 1867 under the successive British Raj. In 1867, the administration of the Settlements was transferred to London, bringing them under the direct control of the United Kingdom as a Malayan crown colony.[16][17][18]

From 1867 to the 1940s, Singapore, having taken over Penang as capital of the Settlements, grew into a thriving entrepôt and settler-colony under the auspices of the British Empire, attracting large numbers of non-indigenous settlers and sojourners from the region and beyond.[19] During the Second World War, Imperial Japan invaded and annexed Singapore, resulting in an interregnum of British colonial rule corresponding with a brief but bloody Japanese occupation from 1942 to 1945. Following Japan’s surrender in 1945, Singapore was returned to British control; in 1946, the Straits Settlements were dissolved, and Singapore became a standalone crown colony. In 1959, following a protracted period of agitation against colonial rule, Singapore was granted limited autonomy; in 1963, it became fully emancipated from the British Empire upon its federation with the territories of the erstwhile British Malaya and British Borneo to form the new country of Malaysia.[Note 10] However, after two tumultuous years as a constituent state of the Malaysian Federation, marred by violent ethnoreligious strife and other intractable differences between indigenous and non-indigenous groups, Singapore was expelled in 1965, becoming the first country in modern history to gain independence against its will—although this narrative remains contentious.[Note 11] After early years of turbulence, the newly sovereign nation—viewed as a nonviable state by international observers due to its diminutiveness, geostrategic vulnerability, absence of natural resources, and lack of a hinterland—defied odds by rapidly developing and industrialising under the leadership of the inaugural People’s Action Party to become a high-income economy and developed country within a single generation.

Singapore is a unitary parliamentary constitutional republic with a unicameral legislature that has been characterised by dominant-party rule since independence. It is considered a soft authoritarian technocratic state; the Economist Intelligence Unit rated Singapore a “flawed democracy” in 2019.[21] It is the only truly sovereign city-state in the world; it has its own currency and a well-funded military that is considered the most advanced in Southeast Asia.[22] The country is home to 5.6 million residents, 61% (3.4 million) of whom are Singaporeans; as a legacy of its historical nature as an entrepôt and settler-colony, modern Singapore is a pluralistic country with a racially, culturally, and religiously diverse citizenry,[23][24] with one indigenous ethnic group, the Malays, and two settler-descended ethnic groups, the Chinese and Indians, forming the historical and contemporary core of the citizen populace. As a reflection of this pluralism, multiracialism has been enshrined as a foundational principle of the state, and has shaped the country’s politics and national policies. The country, which is Anglophone, has four official languages: English, Malay, Chinese, and Tamil; Malay, as the ancestral language of the country, is accorded protected status in the country’s constitution as the national language, while English is the lingua franca, being spoken as a common tongue by the vast majority of Singaporeans.

The country is one of the five founding members of ASEAN, is the headquarters of the Asia-Pacific Economic Cooperation (APEC) Secretariat and Pacific Economic Cooperation Council (PECC) Secretariat,[25] is a member of the United Nations, World Trade Organization, East Asia Summit, Non-Aligned Movement, and the Commonwealth of Nations, and is a recurrent guest invitee to the annual G20 summit.[26] It is the most developed sovereign nation in Asia, being ranked 9th on the UN Human Development Index, and has the 7th highest GDP per capita in the world.[27][28] It is also considered by Transparency International to be the most incorruptible nation in Asia, and the fifth most incorruptible worldwide. Singapore is placed highly in key social indicators: education, healthcare, quality of life, personal safety and housing, with a home-ownership rate of 91%. Singaporeans enjoy one of the world’s longest life expectancies and one of the lowest infant mortality rates in the world.[29] As a city, Singapore is classified as an Alpha+ global city, and is the only country in Asia with an AAA sovereign rating from all major rating agencies. It is a major financial and shipping hub, consistently ranked the most expensive city to live in since 2013, and has been identified as a tax haven.[30][31] Singapore is also a popular tourist destination, with well-known landmarks such as the Merlion, Marina Bay Sands, Gardens by the Bay, the Jewel, the Orchard Road shopping belt, the resort island of Sentosa, and the Singapore Botanic Gardens, the only tropical garden in the world to be honoured as a UNESCO World Heritage Site.[32][33]