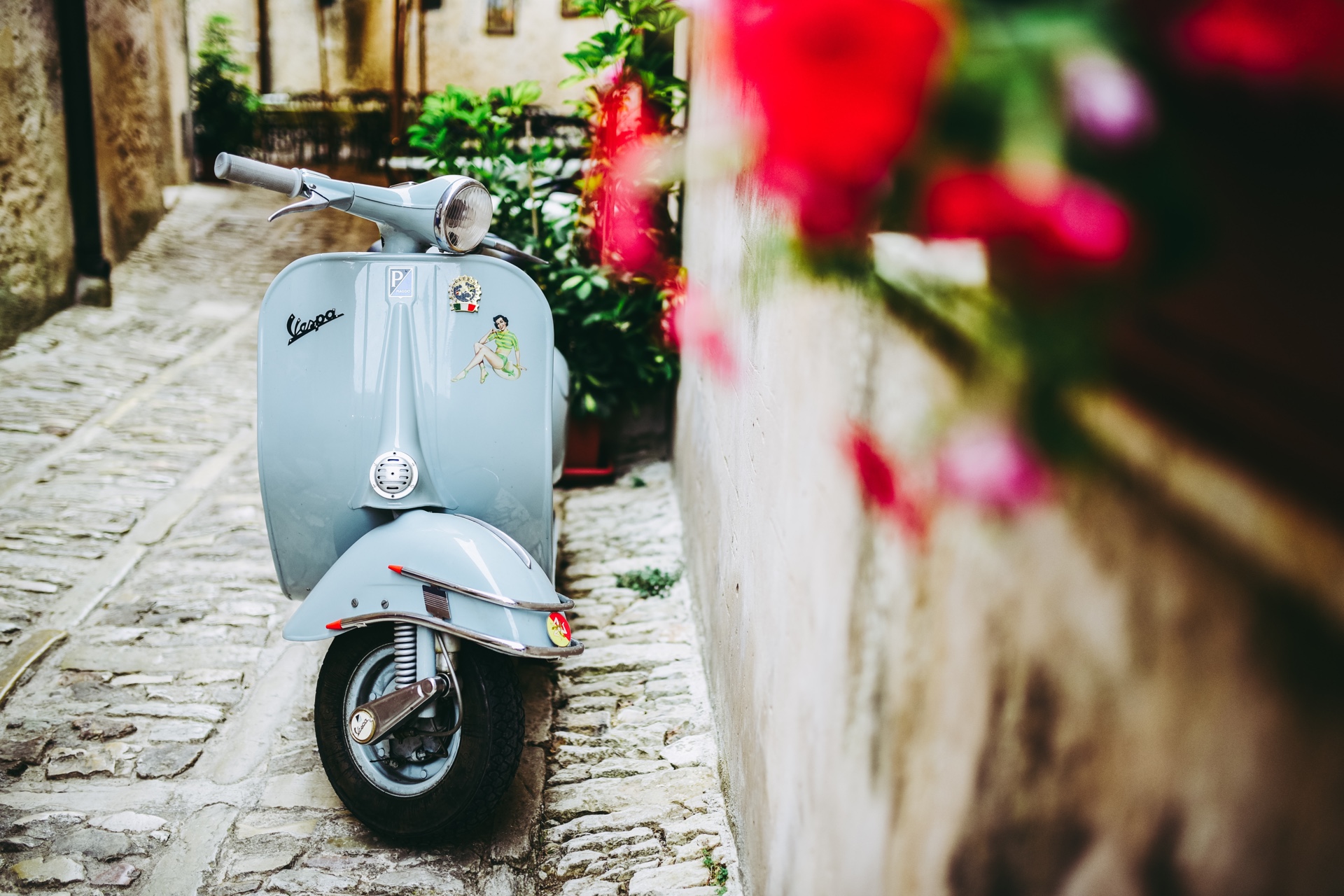 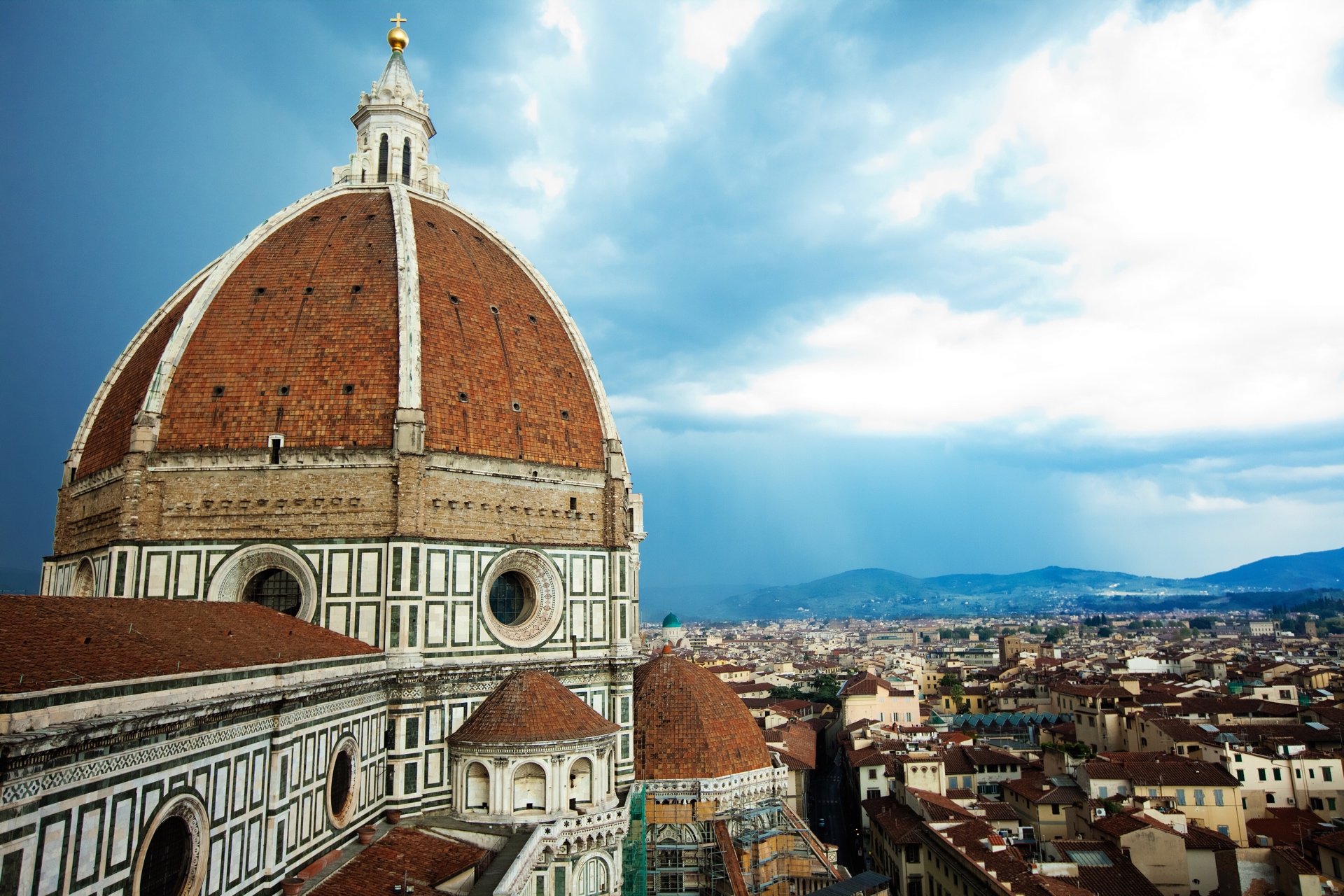 listen)), officially the Italian Republic (Italian: Repubblica Italiana [reˈpubblika itaˈljaːna]),[10][11][12][13] is a European country[a] consisting of a peninsula delimited by the Alps and surrounded by several islands. Located in the middle of the Mediterranean sea and traversed along its length by the Apennines, Italy has a largely temperate seasonal and Mediterranean climate. The country covers a total area of 301,340 km2 (116,350 sq mi), and land area of 294,140 km2 (113,570 sq mi), and shares open land borders with France, Switzerland, Austria, Slovenia, and the enclaved microstates of Vatican City and San Marino. Italy has a territorial exclave in Switzerland (Campione) and a maritime exclave in the Tunisian Sea (Lampedusa). With around 60 million inhabitants, Italy is the fourth-most populous member state of the European Union.

Due to its central geographic location in Southern Europe and the Mediterranean, Italy has historically been home to myriad peoples and cultures. In addition to the various ancient peoples dispersed throughout modern-day Italy, the most predominant being the Indo-European Italic peoples who gave the peninsula its name, beginning from the classical era, Phoenicians and Carthaginians founded colonies mostly in insular Italy,[14] Greeks established settlements in the so-called Magna Graecia of Southern Italy, while Etruscans and Celts inhabited central and northern Italy respectively. An Italic tribe known as the Latins formed the Roman Kingdom in the 8th century BC, which eventually became a republicwith a government of the Senate and the People. The Roman Republic initially conquered and assimilated its neighbours on the peninsula, eventually expanding and conquering parts of Europe, North Africa and Asia. By the first century BC, the Roman Empire emerged as the dominant power in the Mediterranean Basin and became the leading cultural, political and religious centre of Western civilisation, inaugurating the Pax Romana, a period of more than 200 years during which Italy’s law, technology, economy, art, and literature developed.[15][16] Italy remained the homeland of the Romans and the metropole of the empire, whose legacy can also be observed in the global distribution of culture, governments, Christianity and the Latin script.

During the Early Middle Ages, Italy endured sociopolitical collapse and barbarian invasions, but by the 11th century, numerous rival city-states and maritime republics, mainly in the northern and central regions of Italy, rose to great prosperity through trade, commerce and banking, laying the groundwork for modern capitalism.[17] These mostly independent statelets served as Europe’s main trading hubs with Asia and the Near East, often enjoying a greater degree of democracy than the larger feudal monarchies that were consolidating throughout Europe; however, part of central Italy was under the control of the theocratic Papal States, while Southern Italy remained largely feudal until the 19th century, partially as a result of a succession of Byzantine, Arab, Norman, Angevin, Aragonese and other foreign conquests of the region.[18] The Renaissance began in Italy and spread to the rest of Europe, bringing a renewed interest in humanism, science, exploration and art. Italian culture flourished, producing famous scholars, artists and polymaths. During the Middle Ages, Italian explorers discovered new routes to the Far East and the New World, helping to usher in the European Age of Discovery. Nevertheless, Italy’s commercial and political power significantly waned with the opening of trade routes that bypassed the Mediterranean.[19] Furthermore, centuries of infighting between the Italian city-states, such as the Italian Wars of the 15th and 16th centuries, left the region fragmented, and it was subsequently conquered, exploited, and further divided by European powers such as France, Spain and Austria.

By the mid-19th century, rising Italian nationalism and calls for independence from foreign control led to a period of revolutionary political upheaval. After centuries of foreign domination and political division, Italy was almost entirely unified in 1861, establishing the Kingdom of Italy as a great power.[20] From the late 19th century to the early 20th century, Italy rapidly industrialised, namely in the north, and acquired a colonial empire,[21] while the south remained largely impoverished and excluded from industrialisation, fuelling a large and influential diaspora.[22] Despite being one of the main victors in World War I, Italy entered a period of economic crisis and social turmoil, leading to the rise of a fascistdictatorship in 1922. Participation in World War II on the Axis side ended in military defeat, economic destruction and the Italian Civil War. Following the liberation of Italy and the rise of the resistance, the country abolished the monarchy, established a democratic Republic, and enjoyed a prolonged economic boom, becoming a highly developed country.[23]

Today, Italy is considered to be one of the world’s most culturally and economically advanced countries,[23][24][25] with its economy ranking eighth-largest in the world and third in the Eurozone by nominal GDP. Italy has the sixth-largest worldwide national wealth, the third-largest central bank gold reserve, and a very high life expectancy. The country plays a prominent role in regional and global economic, military, cultural and diplomatic affairs; it is both a regional power[26][27] and a great power,[28][29] and is ranked the world’s eighth most-powerful military. Italy is a founding and leading member of the European Union and a member of numerous international institutions, including the UN, NATO, the OECD, the OSCE, the WTO, the G7, the G20, the Union for the Mediterranean, the Council of Europe, Uniting for Consensus, the Schengen Area and many more. The country have greatly influenced and contributed to diverse fields, notably the arts, music, literature, philosophy, science and technology, fashion, cinema, cuisine, sports, as well as jurisprudence, banking and business.[30] As a reflection of its cultural wealth, Italy is home to the world’s largest number of World Heritage Sites (55), and is the fifth-most visited country. 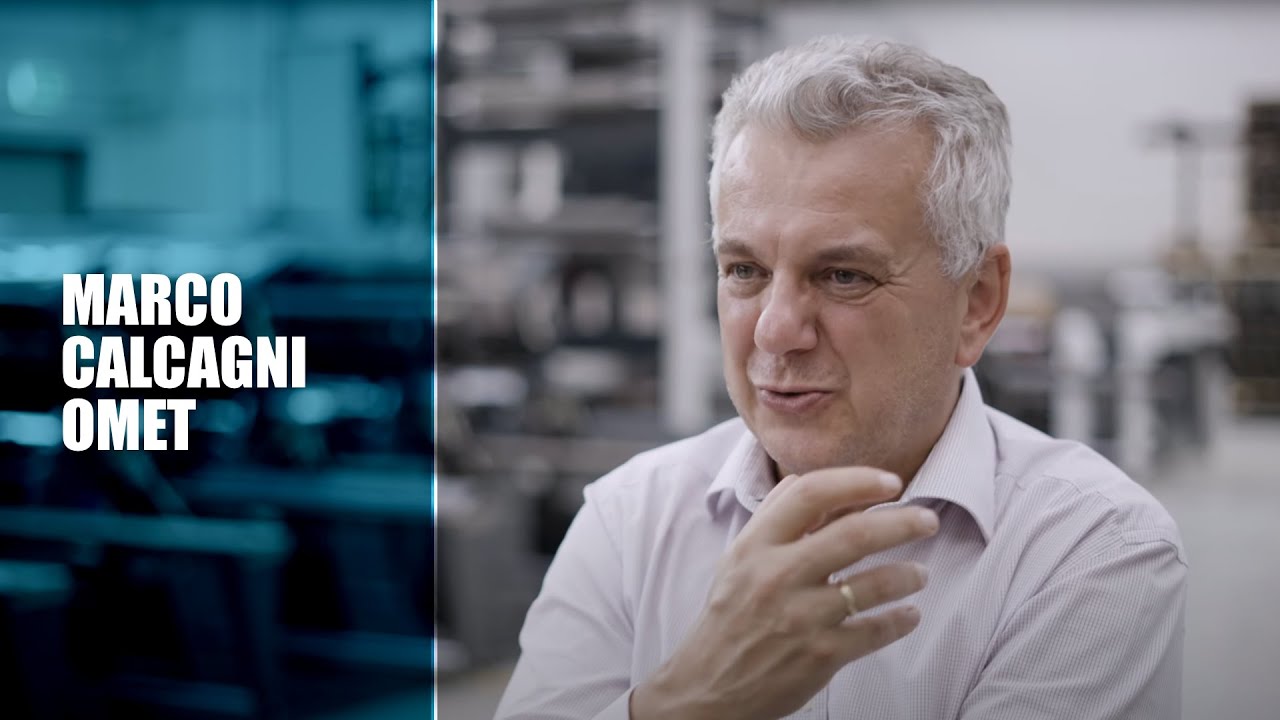 Marco Calcagni has worked with OMET for a long time, and in this 'Conversations' with editor Morten B. Reitoft, he, among other things, talks about the 'defining moment' for OMET. "When our competitors go one way, we go the other way," on why OMET is a success in the flexible/packaging business. OMET, just weeks before our visit, moved to a new build facility with more space for continuing growth - all in all, an inspiring visit in North Italy! LinkedIn Profile Marco Calcagni: https://www.linkedin.com/in/marco-calcagni-28bb5b31/ 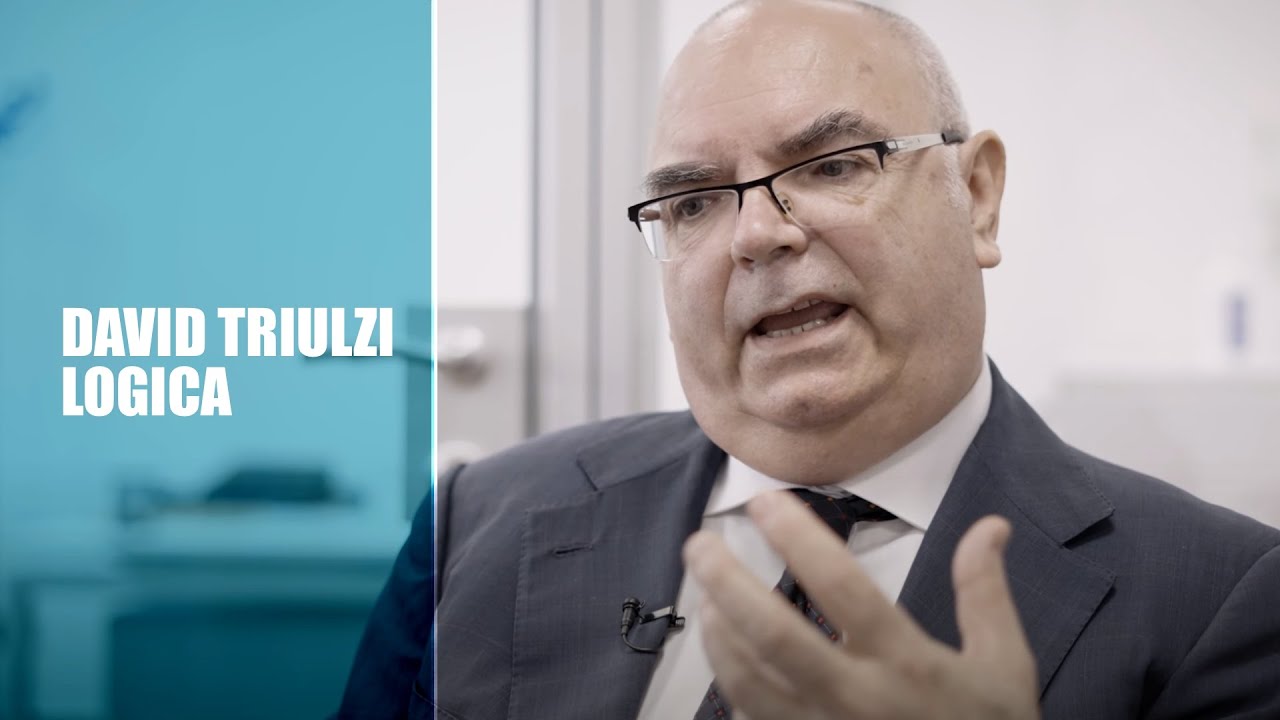 In the suburbs of Bologna, the Italian vendor LOGICA recently moved to a new HQ. LOGICA has specialized in developing software bridging data from production to MIS systems, enabling printers to get a better overview of production and identify bottlenecks. In this 'Conversations,' International Sales & Marketing Director David Triulzi explains how the company started and the value of using LOGICA's products and services. David Triulzi points with particular emphasis on the company's ability to use data from analog equipment by converting mechanical data into electronic data. The other is the openness LOGICA has to integrate with MIS partners and hardware partners that integrate LOGICAs solutions into their products. Enjoy! David Triulzi LinkedIn profile. 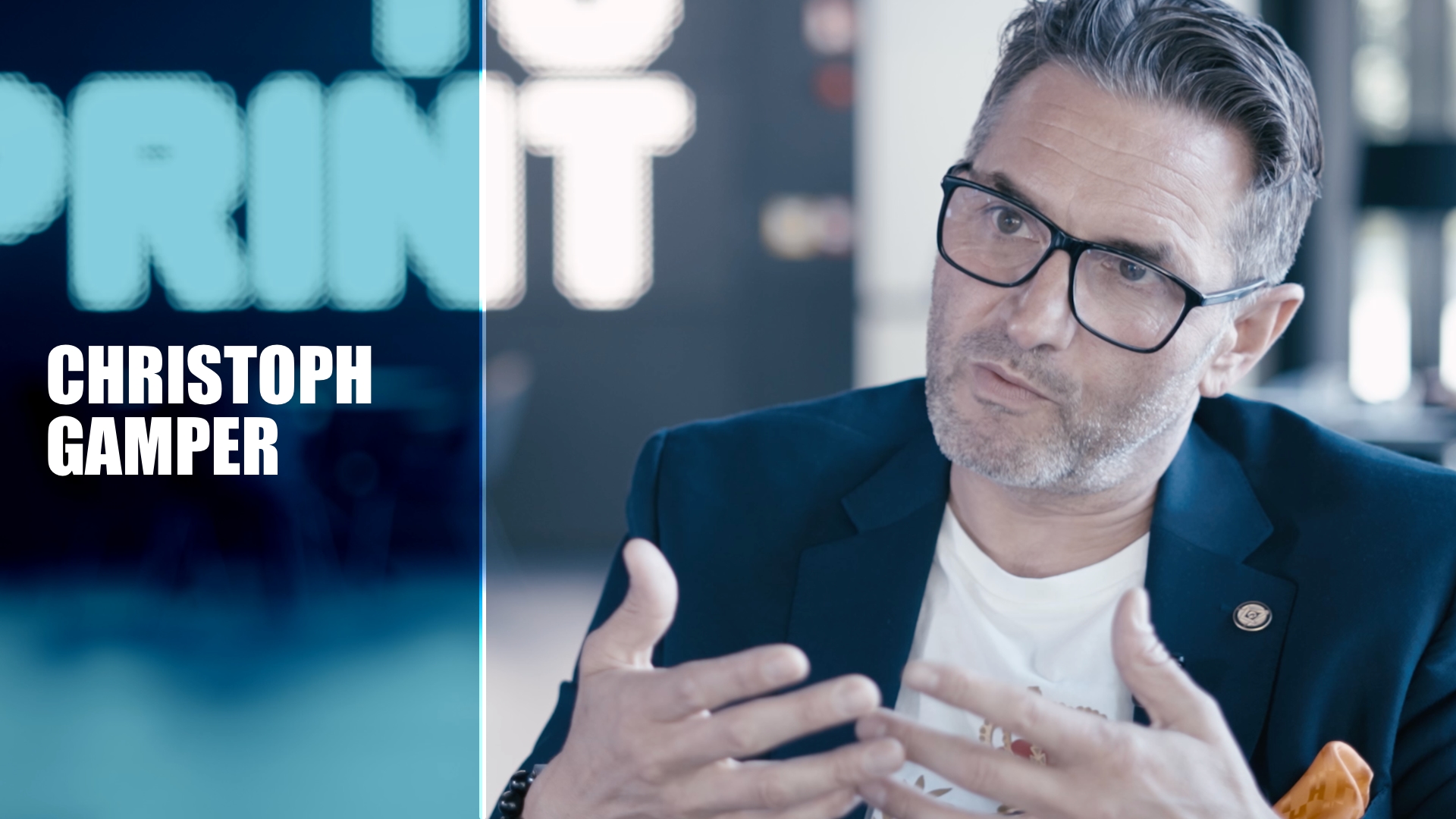 CONVERSATIONS is a popular format on INKISH.TV. This time we feature CEO & Co-Owner Christoph Gamper from DURST. The confidence DURST has is inspiring and with a clear objective of being number one or two in the segments they address is encouraging and an important statement to all stakeholders. Great conversations and I feel confident that we will have more stories from DURST in the future! Enjoy! LinkedIn profile: https://www.linkedin.com/in/christophgamper/   ----- If you read Dutch - please also read the article from our friends at Printmedianieuws. 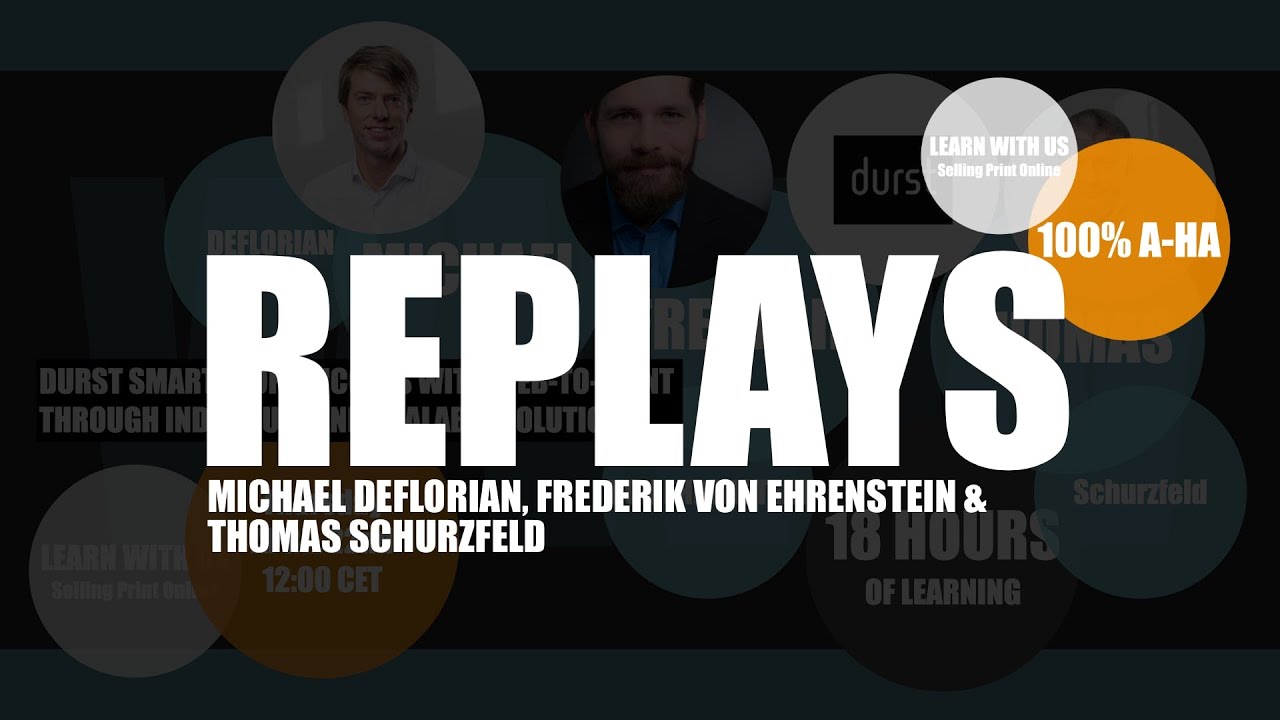 Replay: DURST Smartshop: Success with We...

With Smart Shop Durst offers a web-to-print solution for the wide format, graphics, label, packaging and textile market. Durst Smart Shop is scalable from a pre-configured out-of-the-box web shop to an individual enterprise e-commerce platform for various sales channels – B2C, B2B, reseller & franchise and marketplaces. Our team of experts from the print industry assists to implement, start and grow a successful e-commerce business. In our webinar we will give some insights on how to drive online sales by standing out of the mass with an exceptional print buying experience, on the necessary toolset to run a successful web-to-print business and on how to maximize cost efficiency with full web-to-print automation. Michael DeFlorian https://www.linkedin.com/in/michael-deflorian-562455187/ Frederik von Ehrenstein https://www.linkedin.com/in/frederik-von-ehrenstein/ Thomas Schurzfeld https://www.linkedin.com/in/thomasschurzfeld-a63a5434/ 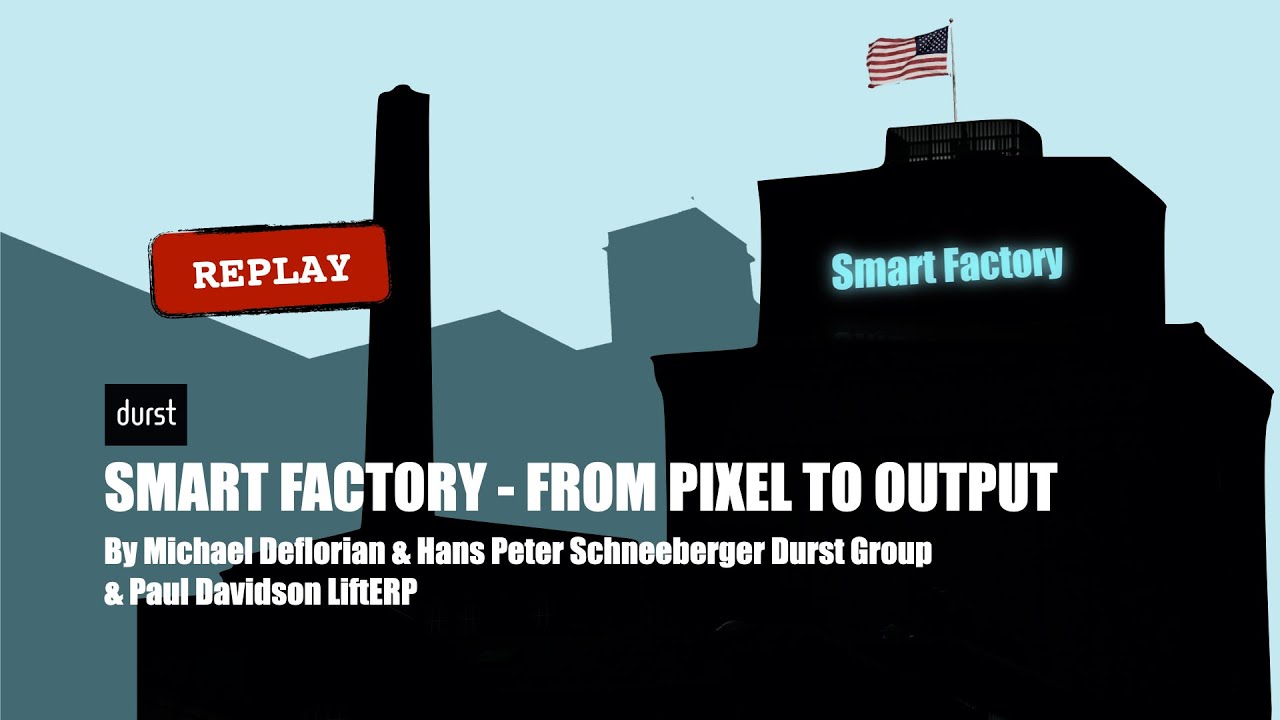 From Pixel to Output · Michael Deflorian...

To establish a smart factory a digital mindset and 360-degree business solutions are needed. We present our interpretation of a smart factory with the goal of full automation of repetitive task and a self-optimizing production. The scope is not limited to the digitalization of production and print data workflows or to automate production lines with smart and connected machines but includes the sales process, customer communication and enterprise resource planning. To make it tangible, we discuss a potential end-2-end business solution using the example of a personalized face mask and cookie box from the creation of a business idea to the shipped product – from Pixel to Output. 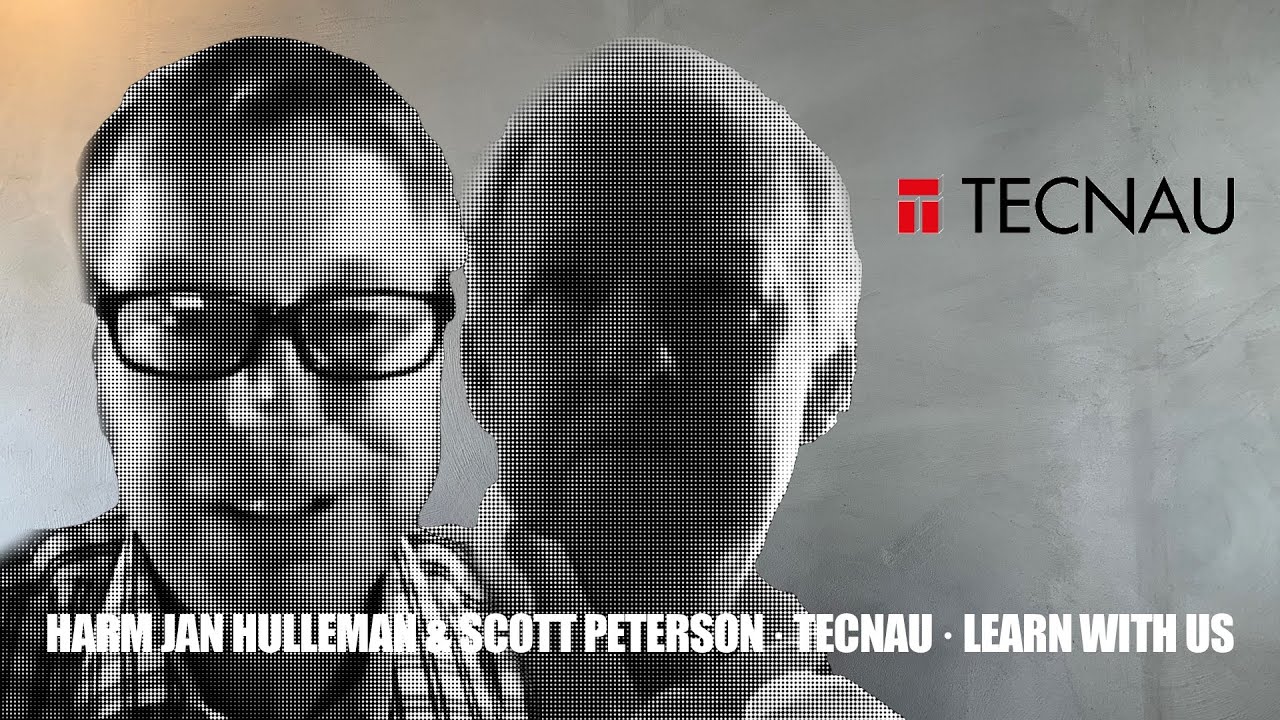 In this 'Learn With Us' session Harm Jan Hulleman & Scott Peterson from TECNAU gives us a presentation of some of the solutions some of their customers have chosen. 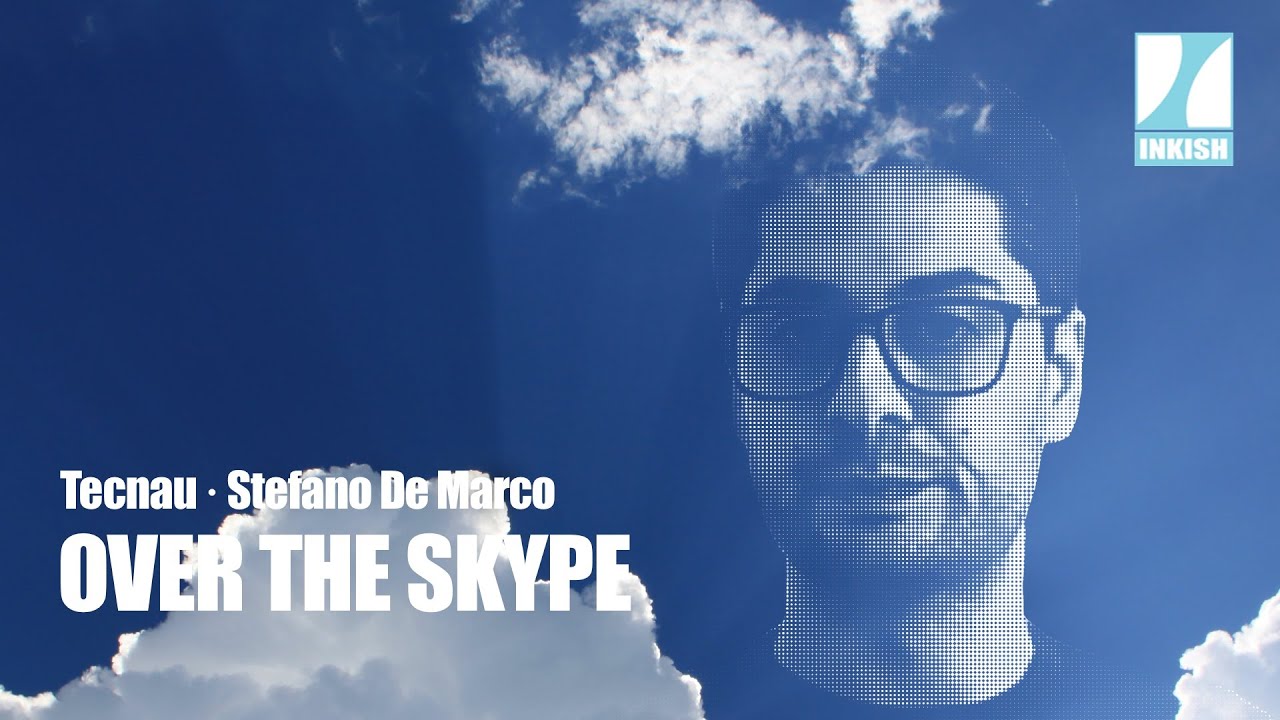 Stefano De Marco recently became the new General Manager for Tecnau taking over from his father. Congratulations to him and Tecnau. In this 'Over the Skype', we talk about market opportunities, competitive situation, and of course also the new Revolution50 platform. One of the things I liked about the session is the discussion about the changing needs when high-volume finishing moves from transactional print to commercial print. As with all our ‘Over the Skype’ interviews, quality is limited to bandwidth, web-cams, and ability to literally LIVE mix the conversations. However, it works, and with Over the Skype, we will bring you more than 20 exciting people, and angles on the industry as it is right now. Enjoy! 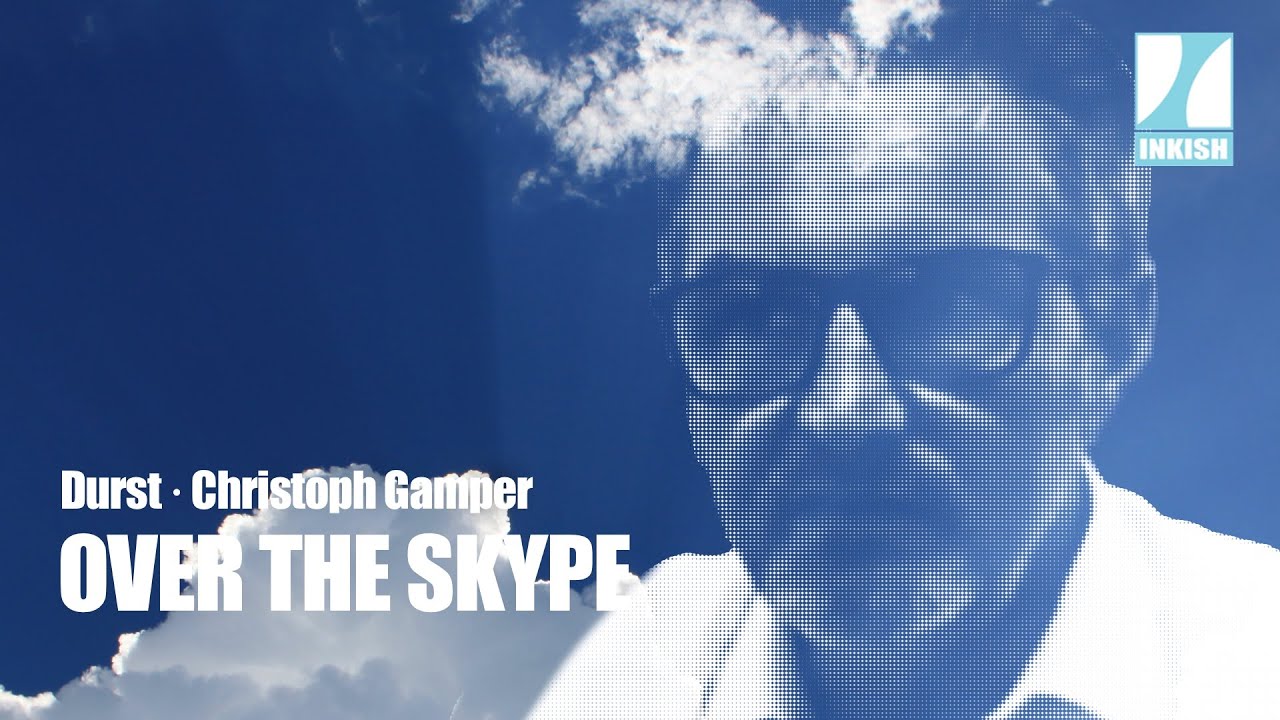 Christoph Gamper · Over The Skype · Durs...

Durst Group is a company with an amazing 80 years history. Though the company today produces amazing print-technology with inkjet printers for several applications, like ceramic, corrugated cardboard, textile, label, and more - the legacy is deep in the roots. Christoph Gamper several times in this Over the Skype session speaks over the values and the fact that being a privately owned company also in these coronavirus times is a huge advantage. Great session and we are sure you will like. As with all our 'Over the Skype' interviews, quality is limited to bandwidth, web-cams, and ability to literally LIVE mix the conversations. However, it works, and with Over the Skype, we will bring you more than 20 exciting people, and angles on the industry as it is right now. Enjoy! 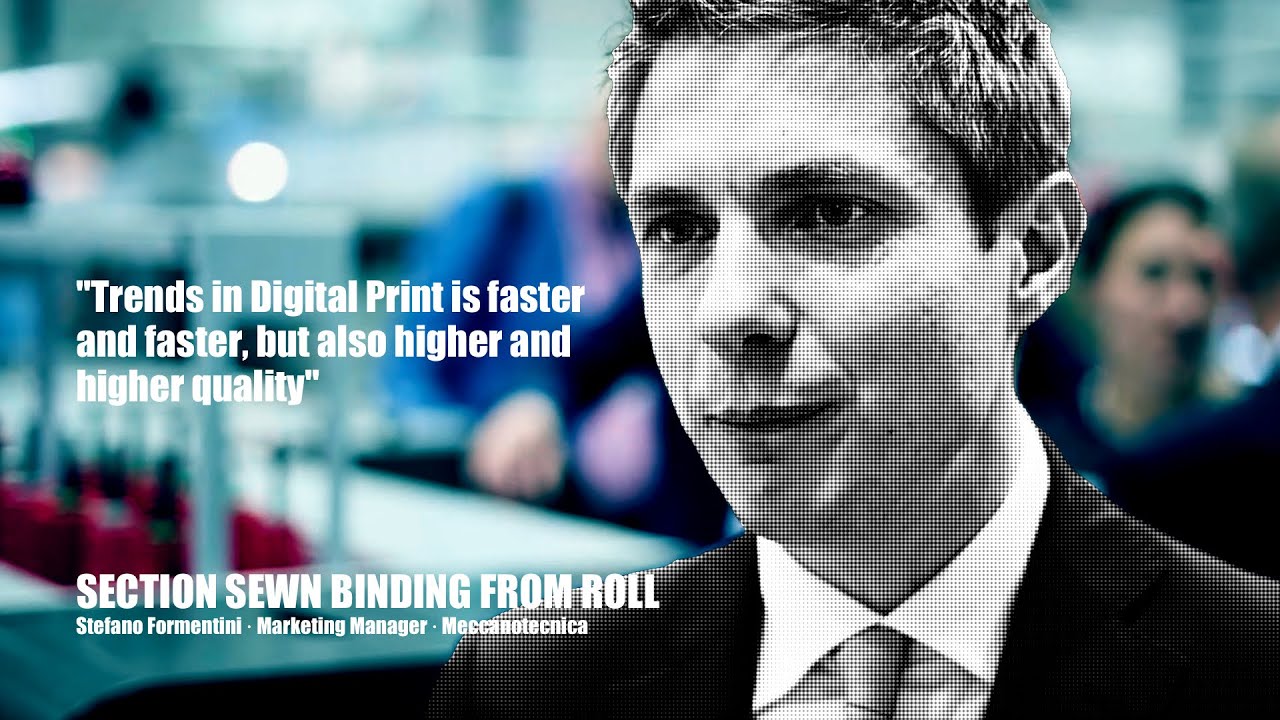 As production moves from conventional offset to digital print the need for binding equipment that matches the qualities known is in demand. Italian vendor Meccanotecnica deliver solutions for both digital and offset. At Hunkeler Innovationdays 2019 in Luzerne, we got the chance to talk to Marketing Manager Stefano Formentini from Meccanotecnica. The solution they showed at the event consisted of an unwinder and a cutter from Hunkeler combined with Meccanotecnica's Universe Web solution that sections the cut sheets into a signature and delivers these for further processing. The quality is superior and the applications seamless. Watch, Like, and Share.

Logica S.r.L
Logica Srl is the italian software house producing and vending specific SFDC for commercial and label industries. Logica Suite makes all machinery, printing, finishing, binding, available for integration with any MIS, in the direction of Industry 4.0 Protocols. Any brand, machine model, of any age, can be integrated through our even non JDF MES. 40068 San Lazzaro di Savena BO Italy
Tel: +39 338 4890273