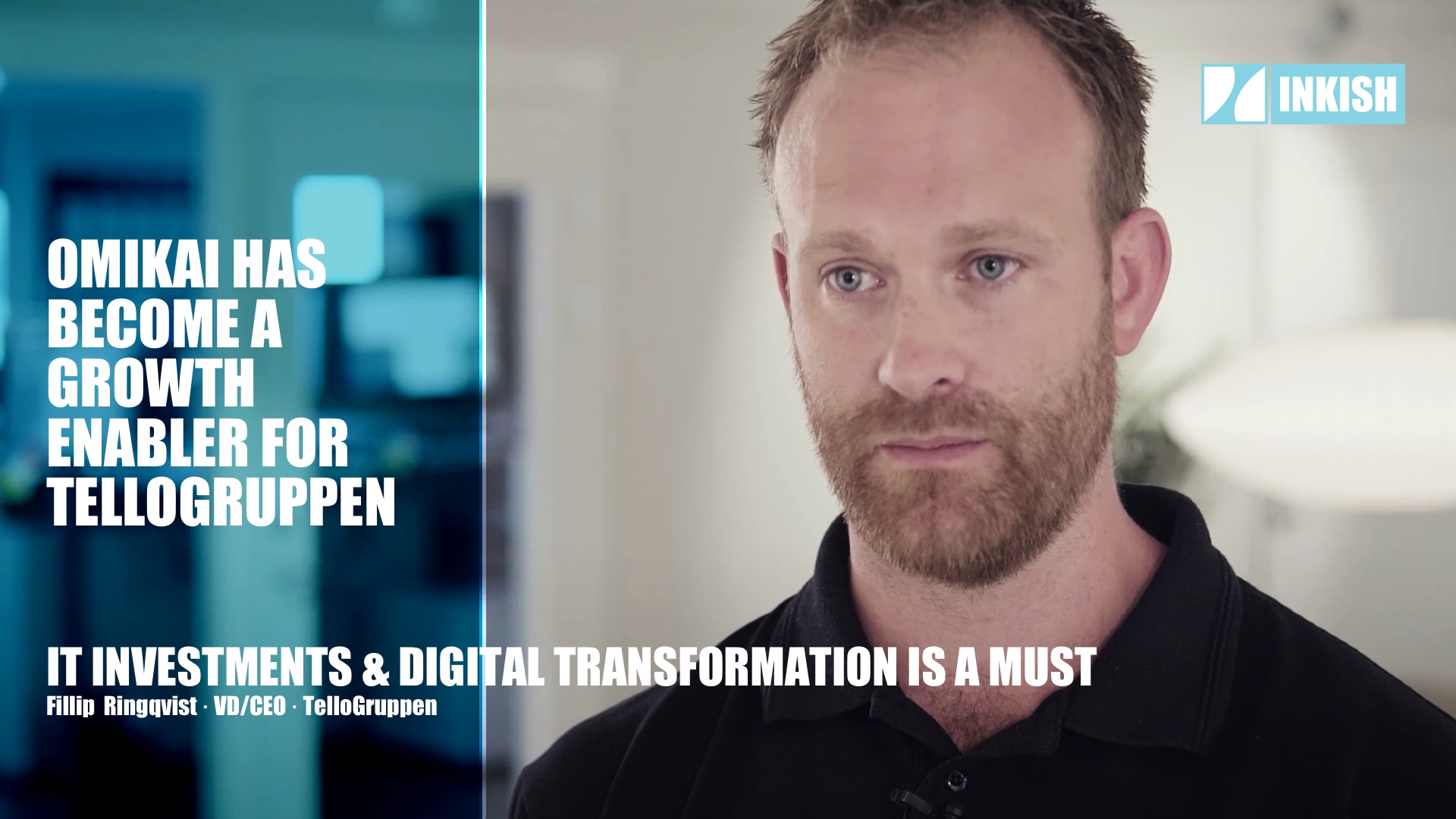 Tellogruppen is a successful fullservice commercial print company based in the city of Söderköping with offices on 4 locations in eastern Sweden. In 2019 Tellotryck acquired Norrköpings tryckeri and are preparing for continued growth. IT and the overall digital transformation is something the company has realised they must use better and be part of if to to reach their long term goals.
In this film the CEO Fillip Ringqvist gives a short background of the company, how they work and why their IT and ERP-system are increasingly important for the future.
Tellogruppen är ett framgångsrikt fullservicetryckeri med huvudkontor i Söderköping och med verksamhet/kontor  i Norrköping, Västervik och Stockholm. 2019 förvärvades Norrköpings tryckeri och nu satsar företaget på fortsatt tillväxt.  IT och det generella digitala transformation är något företaget inser är av högsta vikt att använda och dra nytta i sin framtidsresa.
I denna film berättar Tellogruppens VD Fillip (Fille) Ringqvist om företagets historia, hur de arbetar och varför IT och affärssystemet har högsta prioritet för att klara framtida tillväxtmål.

I think we need to put the customer a little more in focus. So listen to the customers a little better. Not be the classic we have talked about a little earlier here with order receipt and such things but be a little more proactive.

Since the 1860s but has been in the family’s possession since 71, 1971. We are 22 are scattered in Västervik Stockholm Norrköping and here the head office. We have a distribution of five sales people and others in production.

As it is now, we drive with stood for food and car lessons to simple business cards and complicated hair bands like books. I would say that we have the width in between before we said that we print everything on paper but now we are ready to get down to a material car sticker. And such things have broadened considerably.

No, we do not really do that, we have not sold out like that, but we do have some special customers who deal with customer surveys and such things, and then we have found solutions to drive solutions from the beginning to the end. So such customers are a big part of us where they handle everything from printed matter production to distribution to mail and such things.

I would say that our breadth and flexibility are two key factors. The family business has made it possible for us to work in uncomfortable times. The family has worked all the time, but we have also, not turned down anything because, as I said, we have also had a great breadth to be able to do a lot inside.

Apart from the pandemic, no, but I would say that digitization is a part that we have to adapt to and I think, as I said, that it got a little extra push here now in the sign of the panel, but so the graphic industry can adapt under its auspices with digitization. Not just a substitute but it should be together instead.

So I think above all this with different system integration and use that bit to find margins. After all, it may be that you may have to cut a cost among the staff, you can find the software and so on get in that way instead.

I would say that the priority number one in it when we went through it was that it was goal based so that it was easily accessible for all salespeople to access no matter where they were, as well as not having to plug in our firewalls and operation to pull such things without it wherever they were in the summer place at a customer’s home. The easy accessibility.

It went quite smoothly so we had a lot of support from Mathias at Mikaj and then I and another one had to sit with us and pick out the most important parts so we did it together so would say that it went very smoothly.

I think it will be more important because you need to have the whole and it is good not to have to mix so much but may have gathered in one place and use a real force in one and the same system instead of holding on but of course it can integrate with others but simplicity speaks for a system.

We are looking at and connecting in June in Falun and things like that to be able to streamline that bit as well. We are not there yet but it is a step in the right direction. I would say that this is the financial year we have broken years that we have until the end of June 2021, so that is my goal in any case. Yes, I definitely think so and this is what web to print solutions are for web shops and such things and then it is important to be able to have it within us as well.

I think you should perhaps not say development but still a high level of knowledge to be able to drive these things drift and take care of it all the time. It is very important, then, as I say, that it is a matter of cooperation more than it should be a customer-supplier relationship so we need to find collaborations that I am looking for with our customers as well and find collaborations instead of buying-selling. We have a close collaboration we were in early on about in Kari’s system and it will continue in a good way when we talked to Mathias and CEO of Mikaj and start development advice such things and I think it is a bit like we have talked about before he listens to customers. It feels good then we get a good collaboration there so I think it will continue then.

I think we need to put the customer a little more in focus, so listen to the customers a little better. It was not the classic we have talked about a bit of times here with the words reception and stuff like that but be a little more proactive finding that bit.

I think it is again to listen as I said and see if you can be helped on an additional level that you do not just become a supplier and cog in a wheel. It could be that someone has services that we benefit from that we can help with and use so that you find that piece.

I think that due to this unforeseen pandemic that is. I still believe that we will take a step forward in terms of sales. I believe that our integration Norrköping’s printing company is fully developed and we have developed our sites. In both Stockholm, Norrköping and Västervik, another step in terms of production, I do not think we may have a brand new product to sell, but I think we will change what we have now. 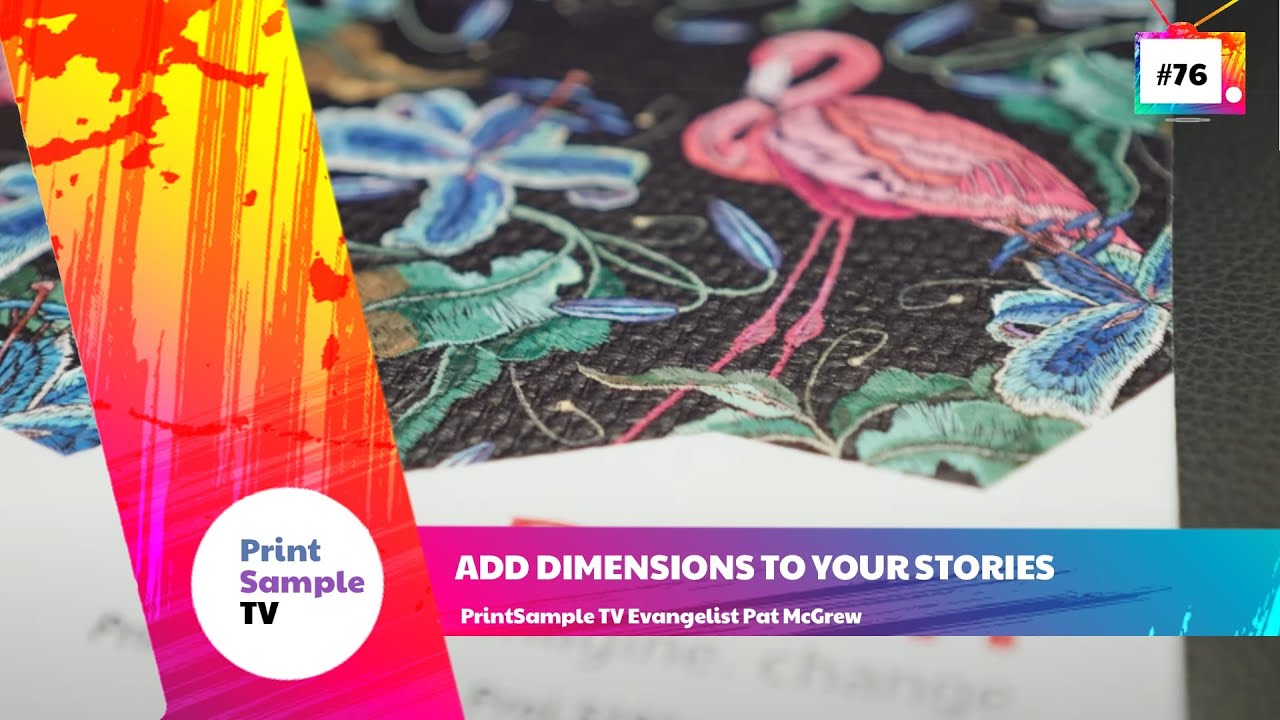 When Pat McGrew goes to Italy she brings back samples that rock - and here she presents great samples produced by Ricoh. Textures, different substrates, seem that the imagination is the only limit you have, so be inspired by your host and evangelist Pat McGrew!