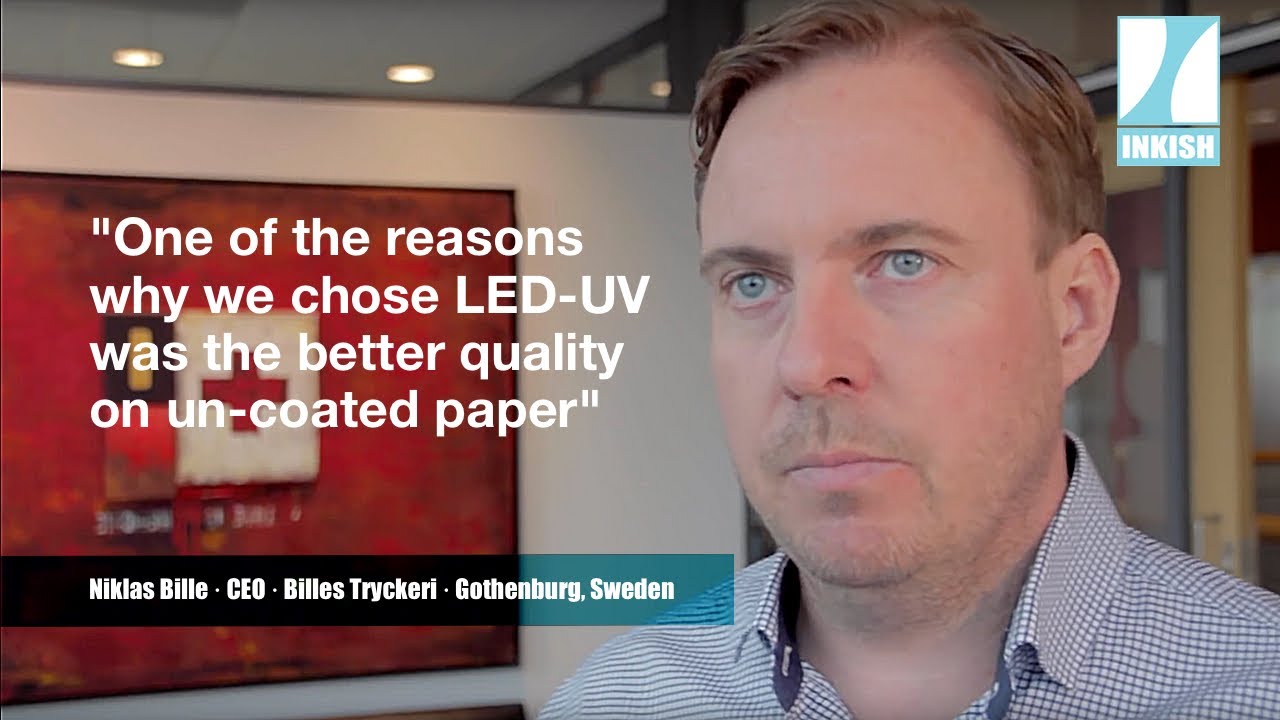 For us it has been a cost-benefit to have this technique.
Of course we would like to keep it to ourselves.
We’re in the race now because we didn’t have it at all before.
The market loves it. We think we can definitely sell more with this technique.

It’s the future for us.

As a company we have been working a lot with getting the CO2 down a lot. We have reduced it by 75% in 5 years, which are used in green electricity and green heating. We are taking care of the heat from the machines in our systems in the buildings, so we are actually self-service on heating with help of the machines and so on. We are one of the few climate neutral companies in Sweden since 5 years and right now we are having a lot of ads in Swedish media where we recommend Swedish print buyers to produce climate neutral products.

We have made big investments in 2013 and 2014, and that has made a good effect now on increasing volumes. We have 70 x 100 offset department and we have large size offset with Scandinavia’s largest offset press KBA Rapida 205, and then we have digital large size printing with several different machines – UV, Latex and Solvent, and also textile printers for textile, and then we have A3 digital printing with indigo machines, as well.

The special point for Billes, with variety of machinery we have here, it’s almost easier to answer what we don’t have.

We have started a new, little company which is providing digital signage solutions for retail companies and whatever applications. We think that’s a good compliment for all the printed matters we provide today and we think digital signage will definitely be something big in the future. It’s already quite big and it will definitely be even bigger in the future in different environmentals.

Now we are in our 70 x 100 department. We have two Roland machines – one is 705, and one is 708. We have installed the AMS LED-UV dry equipment in the 705 machine 4 months ago, which makes a lot of benefits from the traditional production we’ve had before.

We were falling behind a few of our competitors that have traditional UV technique.

It’s a technique that dries the ink with UV spectra. It’s basically a drying lamp, if we can put it like that, and it’s placed in a way that all the sheets are passing and it flashes and instantly it gets dry. So, it’s a very fast drying system.

We’ve started with one of them – the Roland 705 + varnish, to make sure that everything really works as we hope and want and we are planning the next step towards to installing the 8-color machine.

I think you have to respect that there is a learning curve. It’s described to me that the window that you have to keep the press within is smaller, narrower in this technique, so you have to pay attention to keep all the balances right. You have to, of course, do the testing in the profiles and change sheet accordingly, but it’s also a matter of keeping the balances in the moisturizing water and the chemistry and so on. It was a bit of a challenge over the first weeks and even a month.

Actually, there were many different reasons for why we thought this technology was really interesting.

One was better printing quality on uncoated paper, which we wanted to achieve when the possibilities were shown to us.

It also smelled rather bad with a rather high heat, so the LED technique helps us to get rid of all that.

Better printing quality, shorter lead times with new drying times and possibility to print on more different materials. That were some of the reasons why we were interested.

In the offset business you are used to a long drying times before you can do the finishing and sometimes it’s a lot of hours for waiting before you can start and the world isn’t going that way.

The post-press department is really happy because the dry time is zero today.
So far, it’s been a success on the uncoated paper part, but of course we print coated paper, as well. And now we’ve got the opportunity to print on all kinds of materials, which we haven’t done yet – not that many orders so far, only a few, but we’ve got the possibility to print on different materials and we can even print white now – for instance, on a black paper, which is a nice effect.

It works really well and we have also tried some projects with some different materials which were not possible to print before. But we have more to do on the market side, to show it more to the customers and we are working on that. For example, for today we have 24 customers coming on lunch and then we invite them and show what we can do with a new technology and we hope they’ll like it.

It’s pretty new, so we are expecting more to happen in that regard, but we have had a lot of happy customers, especially those who are used to print on uncoated paper. The sheets are dry when they come out of the machine, so we can run them straight into the post-press department if necessary, so it gives us more time. Sometimes we can even tell the customer that we can deliver a day before, if necessary, so it’s very good. It gives us better control of the production, since again on uncoated paper it was twice a time for coated paper before it was dry, so it was 4-8 hours, and now it’s 1 hour. That’s a tremendous difference.

The ink itself is more expensive, so you have to do the math to see if you can get money back in all the advantages that we see, and we’ve done that, so I think that is a good overall economy in this. I would say that it’s all about the time. The time is money and we can get more jobs through, have the shorter time delays between the jobs and get it out of the house to the customers, and that’s a lot of money for us. We saw it as an opportunity to get competing edge and revive the offset business. We’ve looked into it for a rather long time before we’ve decided that this is the way to go.
I think it is 4 months now since we’ve started production.

For us it has been a cost-benefit to have this technique.

It has turned out very well.

It’s a good thing and of course, the market loves it, so that is a big thing for us. We think we can definitely sell more with this technique and we think there’s a lot coming and this is the way that the market is going, and our competitors, too.

The better printer is sold on uncoated paper, which we print quite a lot, so that is one of the reasons to do it on the 8-color machine, as well. But the machine is now 8 years old, so I don’t want to spend too much money on too old machine, so in parallel we are thinking about maybe buying a completely new machine with LED-UV installed from the beginning. We definitely feel like LED-UV is the future for us.

Now we are in our large size offset department where we have a KBA 205 4-color + varnish and we print a lot of posters out to advertising air and multi-sheet billboards and posters for retail companies. We think offset still has big advantage on many jobs, but we also have digital printing in indigo machines. We are thinking about Indigo 10000 as well right now, but we still have different kinds of projects where they are really competitive. So we think that for quite many years in the future, offset will still be competitive to the digital printing on specific productions.

Competition is good and I think we are quite competitive for many reasons. One of them is that we have developed a lot of web solutions. Over 60% of our incoming orders today are coming from several different web-to-print solutions, which makes us very effective on the administration and the pre-press, so we think we are still really competitive. Of course, we can feel competition from East and South of Europe and so on, but we still manage to do quite well. Our strategy for the last years has been to make more and more different products, everything from envelopes and business cards to outdoor campaigns and textiles, and everything there in between. And for us this has been a good way to achieve good results last year.

Now we are in the A3 digital printing department. We have two HP Indigo machines running in three shifts and we produce a lot of different print jobs here – from business cards to brochures, books and whatever suitable for HP Indigo machines.

Right now we have quite a nice mix between doing the most suiting jobs in each press.

They cover the total range of business printing, but they don’t cover all of Sweden, so I am responsible for southern and western Sweden; Niklas is responsible for Stockholm.

“What is the single most important sales argument, when you sell for Billes Tryckeri?” It’s probably the offer we have, all that we can offer under one roof, that we’ve got so many things to offer to the customer, that we are an all-concept production unit. We can help them with more-less everything.
“Is the new LED-UV technology used actively to get new customers?” We have started and we are in the process. It’s quite new for us, so we will exploit that avenue a lot more.

“The customers seem satisfied with the new technology, but can they actually see the difference?” They have told us that it’s a lot better. Because of the marketing we do for ourselves all the time, it’s hard to say if they already knew or if they’re just happy, but one thing is for sure that they can very clearly see that the result was better and they even contacted us to tell us that.

“Have you been able to make more money now, for instance by raising the prices?” We have chosen not to do that at this stage. We are looking for more customers, so we might if we see that everyone is as happy as those customers that already are, we might have a chance to earn more money per job, so to speak.

“Does ‘Billes Tryckeri’ now have an advantage over competitors?” They haven’t quite noticed that yet, but we’ve got a few competitors that have traditional UV, so we’ve got an edge over them now and primarily we are in the race now because we didn’t have it at all before; we had traditional offsets, so now we can compete for those high-quality orders that we couldn’t before.

“Is this high-end market less competitive?” It’s hard to say, but I think at least it’s easier to get the price you want, but the competition is still fierce.