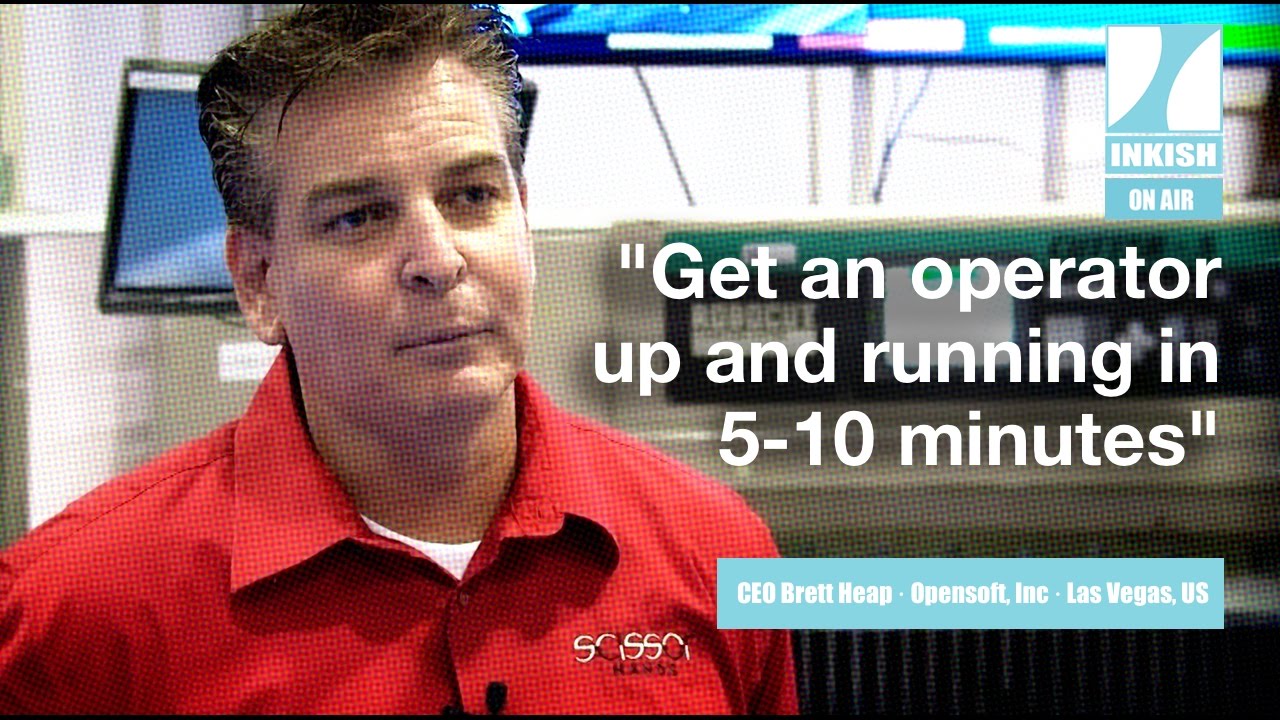 At Graph Expo 2014 I first met Brett Heap from Opensoft or to be more precise I met him at a booth at Graph Expo presenting Scissorhands. It took a little while to understand exactly what Scissorhands as, but nice scissor girls – inspired from the film Edward Scissorhand, the young girls were dressed with scissor hands and made an appearance that at least would catch attention. Scissorhands is a software/hardware plugin that enables cutters to operate smarter, faster and extremely more simple. We at INKISH.TV have been fans of Scissorhands since then and have spoken about them at every given opportunity – finally we got time with Brett Heap at the recent GraphExpo, where he explains about this REALLY great and cool product.

0:27    Scissor Hands looks at the job that needs to be cut, figures out the best way to cut that job, and then programs the cutter. And now, we run on multiple different devices including slitters, die cutters, laser cutters that we have over there, and of course the guillotine cutter. So, we figure out the best way to cut it, automate the process, program the cutter to do it, give a visualization of how to cut it so it’s very simple for the operator in order to cut that job.

0:58    Were you the first on the market with this kind of software?

1:03    In terms of the animation, we were and still are. There’s still nothing out there that has the animation and basically no control panel. It literally takes five minutes to train somebody because there’s no complicated screens to do, nothing to really operate. It just works. And so, that very simple, you know, almost Steve Jobs Apple-like, you know, interface is what we’re going for. So, it’s so simple anyone can use it.

1:30    The Scissor girls always stand out at your booth. Can you tell us how you came up with the idea and the name for the software?

1:35    The codename, the software code name, we always have names for our software in development, and there’s a code name for it, and the developers came up with the name Scissor Hands for this product. When it went to marketing, they were going to change the name to, you know, some sort of thing that said ëcorrect cutterí, you know, ëcomputer cutí or something like this, and at some point we said, ìYou know what, it’s really more of a catchy name. Let’s leave it at Scissor Hands.î So, Graph Expo is right before Halloween, so we kind of put the two and two together, so let’s get girls in, you know, costumes, Scissor Hands costumes. We actually got some more, you know, fancier blades for them to wear, and the first year that we did it, we had a tiny little booth and we had our eight Scissor Hands girls, and we had a line of people at our booth, you know. I don’t think half of them even knew that we were selling software, but they knew about the girls. And the next year, the same thing, so it was lucky for us that it was a just a boon in marketing that everybody remembers the Scissor Hand girls, and you know ñ and eventually theyíll realize now that it’s software for cutting, so they put it together.

2:55    We run on multiple different types of cutters. Obviously, we like the Itoh, POLARs and the fact that we’re talking with. They’re all great cutters, and so we work with all those cutters. The IDEAL, even in the small format, we have the IDEAL cutters, the MBM prime cutters.

3:19    So, it’s a software license. There’s a hardware part piece that goes in. We have a little piece that goes inside each cutter in order to talk to the cutter. Some cutter manufacturers are now actually putting the port on the cutter and a sticker saying, ëScissor Hands readyí. So, with those cutters, you just plug in. We plug in and we’re done. There’s not even a board that needs to go inside anymore. All it takes is to get the software license. The license is actually available on scissorhands.net, so you can see the license and exactly what it is.

3:54    So, part of the application resides locally on the cutter. There’s a client, and then there’s a server side that is in the cloud, and that is the part that figures out and calculates the cut. So, we take the JDF data which is coming for your pre-press, and we send that to the cloud, and will calculate hundreds of different ways of cutting that job, optimize it, find the best one for your cutter bottle, and send that course back down, marry it with the animation, and present it to the operator.

4:27    One major thing they gain from it is the ability to train operators very quickly. It only takes about five or ten minutes to train an operator to operate this cutter and do it successfully. And, before Scissor Hands, it would take up to six months to train a cutter operator how to operate and program and measure and do everything correctly to cut a job. And then, another major advantage is that you don’t make mistakes. The worst place to make a mistake is in the bindery, because you’ve printed it, youíve paid for the paper, youíve paid for everything, you know. I guess the worst would be if it gets out the door you pay for shipping too, you know. But, if you make a mistake at bindery, you got to go back on press to do the whole thing. So, it’s really the saving in not allowing errors. We have a beta site with the camera system, and if it’s going to cut wrong, it knows it literally will stop the cutter from cutting so you cannot make a mistake. So, these are huge advantages.

5:31    So far, very well. The manufacturers are working with us to get it installed on their machines, the large shops love it because obviously it automates everything, so the larger ñ pretty much the larger the shop, the more attractive it is. It’s really taken to the market very well.

5:52    It’s available in Asia. Itís available in Europe, and available in the United States and in the Latin America, South American and lower. So, we have sales agents and service techs in all those locations.

6:11    Moving more to laser cutting. I mean, as things become more intricate, interesting. Obviously, the slitting was a huge advantage for us, that we can slit things by moving shafts that you wouldn’t think could be slit. And so, that was a huge jump to, like you breathe new life into slitters. Obviously, you know, guillotine cutters will be here forever, but laser cutting is amazing and the things you can do with laser cutting are fantastic, so we’re really excited about getting Scissor Hands on the laser cutters now.

6:42    The parent company Farheap is much more than just Scissor Hands. Can you tell us what else do you do?

6:46    So, Farheap is really just a parent company, and it owns Opensoft, which is our software company, and we do software for different things. We do case management software for courts. We do security software. We do print software for printing. So, that’s what Opensoft does. We also have an online group that does marketing and online printing, and in that group we have several brands including Budget Prints and overnightprints.com, and those sort of things. So, it’s online ecommerce. And then, we have another group, the manufacturers. And, the manufacturing group has print plants, and we have print plants, you know, on the east coast, on the west coast United States. We have print plants in Germany, and then we also have another product that we have which is a totally free product for both printers, providers and for websites, and it’s called Inkwrap, and, it matches up the two. It is our free service for both of them. We use it with all of our products, and so whether a print client can dump an order in, it’ll route it to the best place to have that fulfilled, send it to them, theyíll fulfill it and do all the tracking for you. 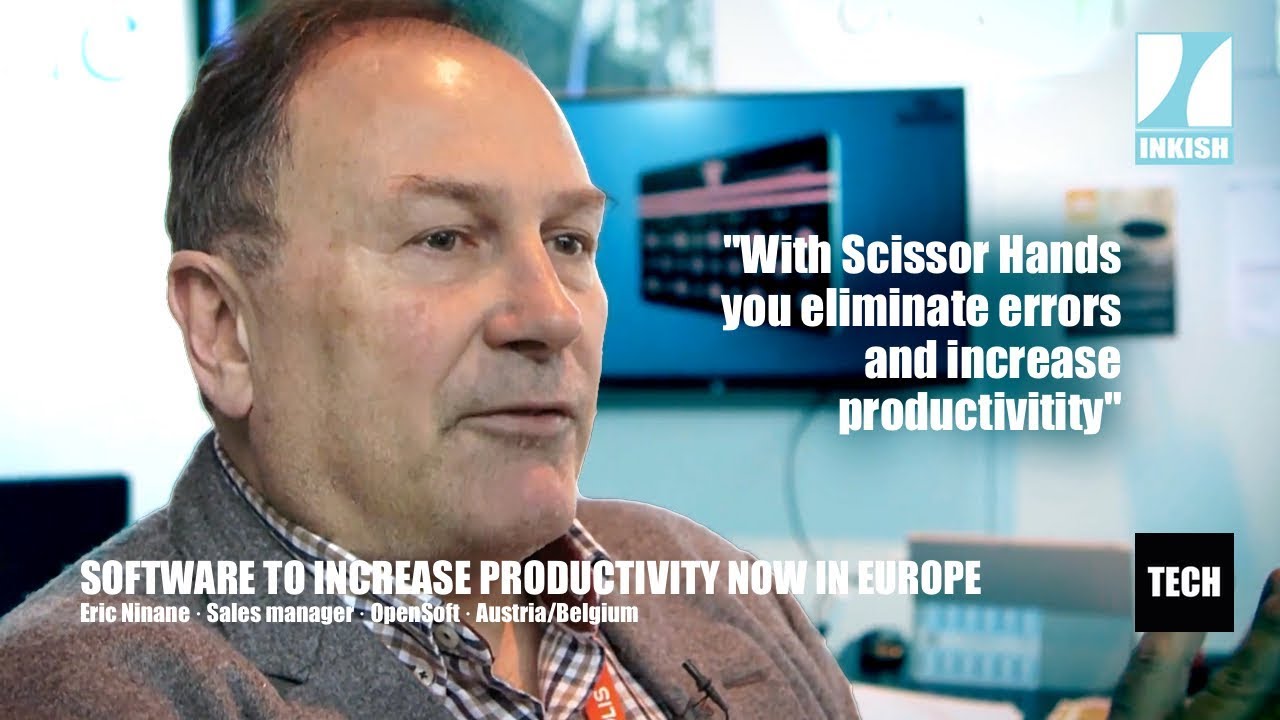