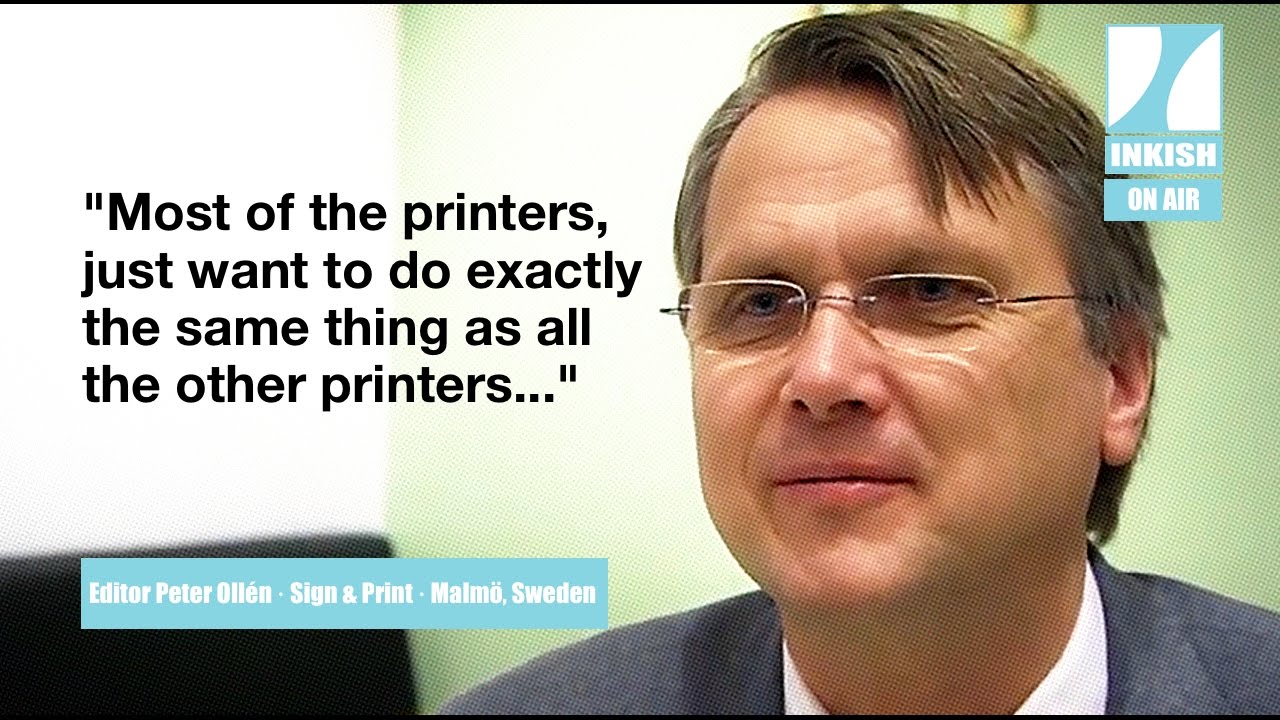 Peter Ollén is maybe one of the most influential and important media persons in Scandinavia. Not only does his magazines, websites, and newsletter reach thousands of users, he is also responsible for Sign & Print exhibitions in Sweden, Norway, and Denmark. INKISH.TV caught him for our second “Conversations” ever – please enjoy.

0:17    Thank you. It’s actually – we have done it for 20 years, and this is the biggest show we have ever done, more so in square meters and more visitors than we have ever had before. And, I think it’s much because it’s good times now. Companies have money, and so –

0:43    Yes. We are in between crisis, and of course, print continues to go down. So, it’s been interesting to see when we – It’s been very much half print and half sign, and I think if – I haven’t made the statistics, but I believe if we did, it would probably be twenty-five percent a print or one-third print now, and the rest is sign. Because this, with the in-store, in everything’s instore, instore. So, I think fifty percent of what we see is instore.

1:23    But when you talk about that this is the biggest event you have been doing for 20 years now – I mean, one of the things that I have always liked about you is that you seem to be good at understanding where are we moving. I mean, you have a magazine that you publish, you have newsletters in all Scandinavia. I mean, you are – I mean, I meet you at all international exhibitions. But, you have a thinker. You understand the market, don’t you?

1:52    Yes. But, there’s one thing I’m frustrated about. And, I spoke to Javin Haparishnes, who is the managing director of the Prints Federation here yesterday. If there is a tool show, then people will go and look to buy the tools to go home and better do the patterns they have, the inventions they do, the special product that they’re doing and selling. But, the graphic arts industry, they expect the vendor not only to give them the machine, but also to give them everything about how the things should be done. So, we have a few here that have invented their own solution of how to hanging in, so you don’t have to have a roll up, but can have an aluminum frame instead, or someone who have done a special software, or someone who are doing some other unique stuff. But really, most of the printers, they just want to do exactly the same as all the other printers.

3:02    And, is that something that has changed in these past 20 years or has it always been like this?

3:06    It’s always been like that, and of course, we’ve been spoiled during the nineties. Suddenly, the print volume quadrupled, and why did it? Because, we went from one color to four colors. So, I mean, that meant a huge growth in print all up through the nineties. So, even though you were an idiot, you were still growing your business.

3:34    But doesn’t that just mean that in today’s business, you have to be a little bit smarter to actually make money and survive?

3:40    Yes. But, the problem is that what we have seen is that there are much fewer printers today that are working more rational, but really doing the same thing. What we should see are the ones that invent a way of doing something in a different way.

4:00    Like yesterday, I saw a presentation from Fredrick, from their gelato? An example that is just brilliant. And, I mean, if you look at some of the few very, very successful, like Elantis, they have also like, kind of invented themselves as an international brand. I mean, not a lot, but there’s a few that really is lightning towers in the industry, right?

4:31    HOT Screen are printing all these little labels in back of your shirt and so, and they are sent out to China and to everywhere. Because the brand owners are so scared that it will not be exactly the right color, that it will be blurring when it’s washed the first time, that something will happen, so they need to know that these little items are exactly the right way, and they will work all the time.

5:05    They do print it there, and they have, I think 20 or 25 employees, and they do nothing but tiny, tiny, tiny little things all day, and send them all across the globe.

5:19    But, what I find so interesting about what you say here, and I’m pretty sure that we share that thing is that, sometimes when you are in a country like Sweden or Scandinavia, where we sometimes claim that the crisis is based on a high labor cost, high taxation or that, and then anyway, it’s possible to build the business because you are brilliant in your mindset and you’ll find the niche that is really interesting. So, I mean, do you think that maybe the leading question, but do you think that actually the solution of our industry is to let our owners of the shops to be better inventing new stuff?

6:24    But then, they will think, ìBut if I do it, and it’s got a flat that you can tear off.î Yes, that’s okay. Or if I put a card on the back with a little sticker on. Yes. Then, it’s okay. Or if I do it that we put, do the print embossing so you get the special feeling. Yes. Then, it’s okay. But then, you are with every customer forcing yourself to do something that will add the value for this customer.

6:58    See, that is – I know that you and I have been talking about this before, because I think that if the entire industry works towards owning commodity print, and we only have 8 pages, 16 pages,  a 130-grammatical grade paper, then it just be a race towards the bottom, because nobody can make money. Of course, the very big ones can, but it will, in my opinion, it’ll probably just remove the demand for more special product. And before that, anyway, same thing. I actually liked what you send out for Sign & Print. It’s not this one. But, you sent out an invitation where there was like a perforation, and there was like digital printed name card directly on, so you can just put it directly in your badge.

7:41    You could tear it up, go to the entrance, have it scanned, and use is as a badge. You don’t have to register nothing.

7:55    No. There are several hundred that are using it to get in. To think that’s really convenient.

8:02    Was that your invention or did you have that printed as suggested to you?

8:07    No. I wanted to do it that way, because I felt, ìhow can we do it extremely easy to register?î Well, the easiest is if you don’t have to register. You just get the card, you go to entrance, and it’s scanned. We already know who you are, we know your address, we know your email address, because we have a relationship to you through our magazine, through free newsletters a week. So, we know who you are. We don’t need to know anything more.

8:33    And, you know what I like when I talk to you is that when we talk about something that is nice and brilliant about this industry, your eyes are just like sparkling. Because, I think that sometimes – Also because, you and I have been talking many times. I think that sometimes, if it gets too boring, because too many advertisers, and I mean, I think also as a publisher, it becomes more and more difficult to make money, enough money, right? But, when we do these kind of things, maybe there is a light in the end of the tunnel. Maybe we can make money if we can invent ourselves and find solutions for the industry.

9:06    Yes. But, publishing is really difficult. But, we also run into another difficulty, because we see the movement from advert versus everything onto our digital newsletters, and that is growing all the time, and we make good money on our newspapers, on our digital newsletters. What is difficult is the printed magazines. But then, we see in Norway, where we haven’t had a printed a magazine since September last year, and now several exhibits who’s here have said to me, ìYou need to do some.î So, I discussed and said, ìIs it twice a year, one in the spring and one in the autumn?î And they said, ìYes. That would be perfect.î And then, I spoke to my chairman at lunch, and he said, ìWe really should sit and discuss and take a day where we understand what should the magazine be in the future and where does it differentiate to the digital newsletter? What should it be?î And, I think that is really interesting, and maybe you and Klaus will join us for sorts of discussion of how to try to understand the difference between the printed and digital. Because today, it’s not clear what should be digital and what should be printed.

10:37    Actually, we did an interview this morning, Yen and I, with Michael from Antalis, the marketing manager. And, he said that it was like a survey where you said that, if marketing starts in paper and moves from paper to digital, so the value of the marketing effort is much, much higher. And, he said there was like evidence that it’s not just an idea, but this is actually a fact. So, I think that you’re completely right, and then it’s a good example, because if you say that in Norway, you have not had a magazine for some time, and now there’s a request for getting it. It is apparently because push media and the paper-based media has a value that sometimes you have to not get it until you really appreciate the value of it, right? And, of course it could be fun to discuss that kind of thing to see how to make life in a printed magazine. I think that will be brilliant to find a business model that could work out to make it profitable.

11:33    But, Peter, I know that you’re a busy guy, and I just wanted to just briefly talk to you because I really appreciate that we’re filming here at Sign & Print. I think it’s a great exhibition. And, to all the people out there who didn’t even come, shame on you. This is too good. No, not shame on you. But, they should be here, because the inspiration, and I think also the exhibits, because you’ve put a lot of effort in doing nice booth here. And, I hope that Denmark Sign & Print in the autumn will be successful for you as well.