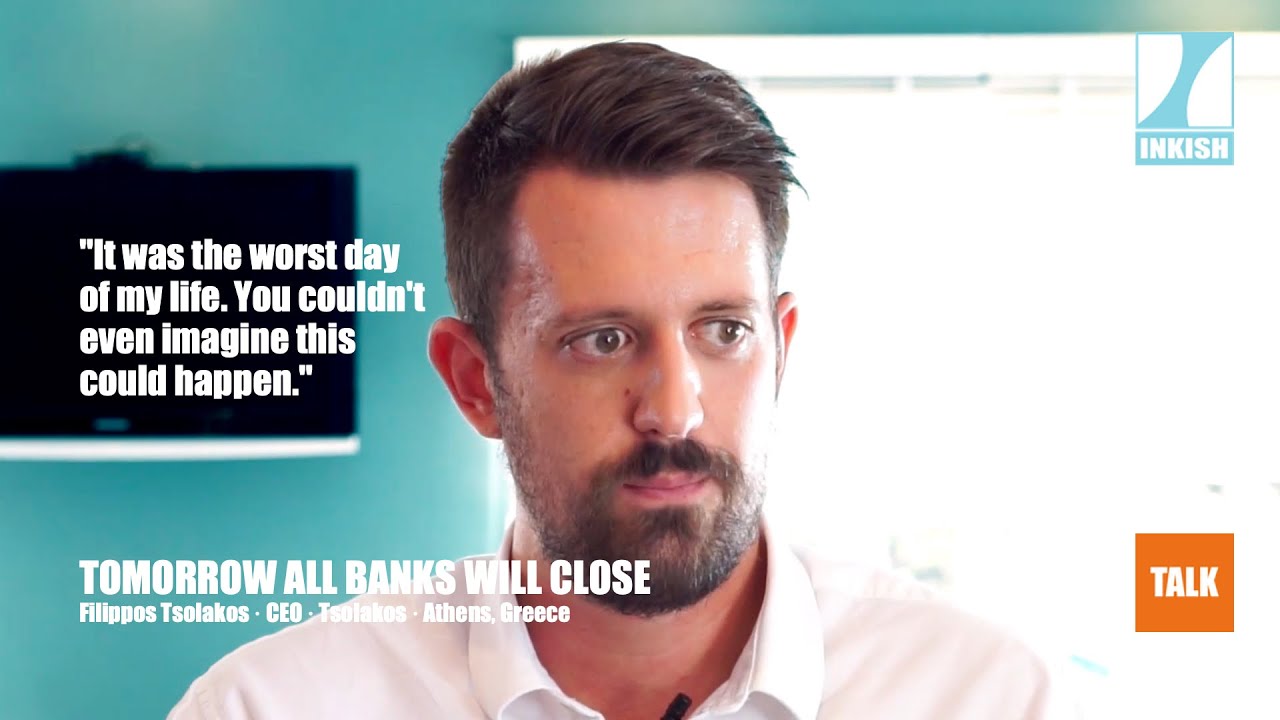 Many printing companies were hit by the so-called financial crisis from 2008. People, workers, owners were hit because of how banks were abusing their strength in society and that has influenced a lot of people almost everywhere in the world. Most business owners think back on the crisis with remorse and quite a few also had to go through bankruptcies, mergers, acquisitions, and even things worse. As if this was bad enough, the story about the family-owned Greek company Tsolakas, tell us how bad it is for any company when banks are suddenly not there anymore.

Imagine how you will operate your company tomorrow if you know you have money in the bank, but you can’t use them.

This story is a very open and honest description of​ what happened in 2015 for Fillippos Tsolakos and his company.

My name is Filippos Tsolakos. I am involving in a printing industry. We supply print houses with all the consumables they need. I’m now the third generation.

Actually, my father and my grandfather used to be printers and we sell in a more technical way. We support not only inks, but through our inks we are selling we support our clients with all the technical support that they need. The problems they might have and all the new technologies, like LED UV by AMS and Flint Group inks and all the stuff.

It was … Actually, it was a nightmare. It was something that I have never thought that it would be actually happen. In one night all the banks was closed. You didn’t have access to your money, you couldn’t take … Send money abroad, so we couldn’t pay our suppliers. Even if we had the money, we couldn’t pay them. This is something that you are … It’s out of you. One night the suppliers are saying, “You have to pay me, otherwise you are not getting any goods.” So you sit there and you’re saying, “What’s going on?”

If it was our fault I would be sleeping more easily than this, because it’s something that you cannot control. It’s like an earthquake. You don’t know what to do and you don’t know the future. Okay, the first months it was really tough, everybody was … Even the printers, the print houses, but not only in the printing industry, everybody in Greece was like, “We have to see what to do.” We could take only 50 euros per day out of the bank. You could pay your debts inside Greece, but you couldn’t send money abroad.

Okay, the first … Just to let you know, the first six months of 2015 we had an increase of sales 38%. After July, the December came with the decrees of 10% sales. Just to give you numbers, just to understand.

It was a tough two, three years now. There was no banks. Even if you could get some money from the bank, the interest was 11%, 8 to 11%, it depends of the product you wanted. Imagine all the profit is going away. It is a market that it is depending of the credit you give to the customers. From the one way you help them to survive, because otherwise they couldn’t survive, but on the other hand you don’t have the … You struggle to survive.

This is something that traders in all of the businesses has, because we don’t import money, we export money. Sorry, we don’t export, we import, so we are 100% relied to companies aborad Greece.

Actually, it came through our minds and left one night. I have to survive. It’s not only 50 years of business, it’s a family company. This is the only thing I know very well to do right now. I used to wok with my partners … We used to work with our partners for over 50 years.

What we did? Let’s make some joke, it was pure magic. Small steps, very small steps. You cannot make plans for next month. You see this week, the next week with small orders, just to cover this week and the next week and the other week. We were lucky, because we were focusing on the packaging division. Okay, this was something that saved us, because in Greece the 90% of the businesses that are relying on packaging, they’re healthy. So if you have healthy customers, even you have to give them credit, you will get your money. Because they are exporting to their customer, so they are getting paid, so I’m gonna get paid. This is … With small steps and week per week we survived.

I actually started working and starting to have the business when the real crisis started. Actually, I have a big asset, my father, he was there every day supporting, and together we survived, let’s say. You never know the future, you never know what is going to happen. But yes, this is a big, big experience. I remember, my father said on that July, “You are going to remember it for the rest of your life.”

If we survive, this is going to be the biggest thing you’re going to learn in your life. Everybody in the company worked very hard, very hard. You know, you are nothing without employees, and the employees is nothing without you. It’s not a motto, it’s something that exist. Everybody’s a family. Otherwise, you see companies that they are very well and healthy, in one night they are going away, because their people is leaving.

Now we are healthy, we are back and strong. We are opening to new clients, big clients, or clients that we lost. I am very, very glad that we have opened doors and we can speak. I think I’m positive of the future. New technologies are coming. I see print houses this summer, they are making investments. Okay, they are not buying new machines or something, but they are buying used machines. They used to have a four color, now they’re getting a five color plus varnish. They used to have a five color, now they are getting a six color plus varnish. They’re investing in new technologies, in LED. This is something that gives hope. 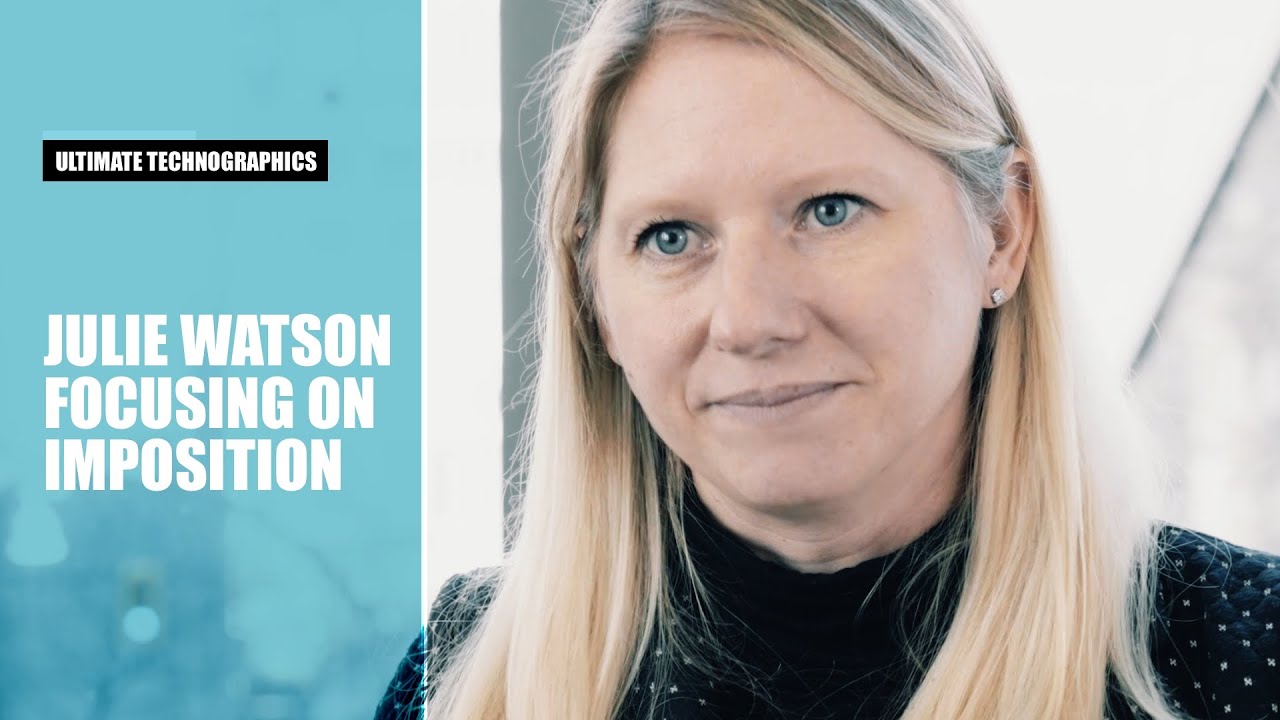 Julie Watson is the CEO of Ultimate TechnoGraphics based in Montreal, Canada. Since 1989 the company has focused on the imposition and was the first to introduce imposition using computers. Just imagine how many things have changed since then? Technology, customers, speed, CPU-power, Memory, and Julie Watson's career plan changed in 2008 when her father suddenly passed away at drupa in 2008. First, her mother, Joanne Watson, took over the leadership. Five years ago, Julie Watson became CEO of Ultimate Technographic - the company by some better known for their flag-ship software Impostrip. In this Conversation with Editor Morten B. Reitoft, Julie Watson shares her views on technology and why speed continues to be an essential factor in efficient workflow/automation. INKISH has months ahead of this interview filmed two Ultimate TechnoGraphics customers Print On Demand from Cape Town, South Africa, and Sendmoments from Germany. Print On Demand https://inkish.tv/inkish-video/pod/ Sendmoments https://inkish.tv/inkish-video/sendmoments/